"Next to Normal" at the Ordway Center 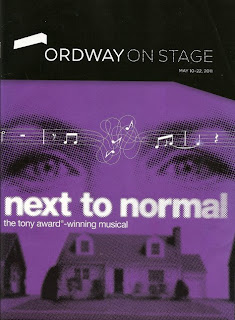 I first saw Next to Normal two years ago on Broadway, shortly after it opened.  I went into the show knowing next to nothing about it, other than it was getting some good buzz, and it was about a family dealing with mental illness.  That's unusual for me; I usually know something about the show I'm seeing and sometimes even get the soundtrack before I see the show.  But this was the perfect way to see Next to Normal.  I was completely blown away by it.  It's really unlike any other musical I've seen.  It's not just the subject matter that makes it unique, but also the small cast (just six actors), modern and affective set, and driving rock score.  It never lets up; you go on a journey with this family and end up emotionally exhausted.  I saw it again on Broadway last year, which is also unusual.  I typically don't spend two precious NYC days on the same show!  But Next to Normal is worth it.  The show closed on Broadway in January and is now touring across the country, with a stop at St. Paul's Ordway Center this month.  This is the third time I've seen it, and Alice Ripley has starred in the show each time.  She only gets better each time I see her, and settles more comfortably into Diana's skin.  (Although there's really nothing comfortable about Diana or this show.)  She owns this role and we're so lucky she's traveling across the country sharing it with us all!

I don't want to say too much in case you have yet to see the show (tickets still available through this weekend!); it's best not to know too much going into it.  The basic story is this: Diana and her husband Dan married young and started a family.  They suffered a great tragedy that triggered Diana's bipolar disorder, which she's been dealing with for years.  Everyone in the family suffers in their own way.  Dan has to be the strong one as Diana falls apart, and therefore never gets the chance to deal with his own feelings about what happened.  Their children, Gabe and Natalie, live in the shadow of the tragedy and are trying to deal with it on top of the normal problems that come with adolescence.  Natalie's afraid that she'll follow in her mother's footsteps, and Diana's unable to be the mother that she wants to be.  Diana hits rock bottom and undergoes ECT (electroconvulsive therapy), aka shock therapy.  It erases her memories, both the good and the bad, and she struggles to get her life and family back.

As I mentioned earlier, Alice Ripley is brilliant as Diana, and the Tony voters agree with me; she won the Tony in 2009.  (As they say in [title of show], she's fierce!)  And she has a strong cast around her, including understudies Jason Watson as Dan and Caitlin Kinnunen as Natalie.  I would imagine that with such a vocally intense show and small cast, understudies go on often.  It's a seamless exchange; they're so comfortable in their roles and with the cast that you'd never know they didn't perform every night.  Completing the family is Curt Hansen as Gabe, who gives an electric performance.  Rounding out the cast are Preston Sadleir as Natalie's on again off again boyfriend Henry, who tries to help her move beyond the issues of her family, and Jeremy Kushnier as Diana's doctor, who in her hallucinations is sometimes her dance partner and sometimes a rock star.

The simple and modern set consists of three levels that represent the family's house, or maybe levels of consciousness.  It's a really inventive use of space; the actors run up and down the stairs and sing from the different levels.  The awesome band is scattered on either side of the top two levels.  The colors are cold and jarring; it's not a warm fuzzy home.

Tom Kitt (music) and Brian Yorkey (book and lyrics) won the Tony for best score, and I couldn't agree more.  It's one of my favorite and most played musical soundtracks (and I have a lot of musical soundtracks).  There isn't a whole lot of talking between the songs, which really drive the story forward and convey the emotions of the characters in a way mere words cannot.  It's at times angry, mournful, beautiful, funny, sad, resigned, gorgeously melodic, and fiercely staccato.  Just like the emotions the characters are going through.  My favorite song is "I'm Alive" sung by Gabe in the first act, but there are too many amazing songs to mention.  With such a small cast you can really hear the precise harmonies; the voices of the cast blend beautifully together, whether it's two, three, four, or all six of them.

This is not a show for the faint of heart.  It'll bring up emotions in you that you didn't know you had.  Even if your life hasn't been touched by mental illness, there's likely something in the dysfunctional but loving Goodman family that you can relate to.  I saw the show with two good friends of mine last year and they got into a seriously intense argument that spilled out onto the streets of New York City after the show.  It's that kind of show.  And that's why I love it.  It's everything that I want musical theater to be: smart, funny, original, relevant, and emotional.  It makes you feel something.

I saw the show on a Wednesday night, which is when the Ordway frequently does their "Ordway Extra" pre-show, as well as a post-show talkback with the actors.  The pre-show talk was by a local psychiatrist from the University of Minnesota and one of his patients, who has been diagnosed with schizophrenia.  He bravely told his story, which was remarkably similar to Diana's.  One thing that struck me was when he said that after he started taking meds and his delusions of being followed ended, he felt empty.  Diana sings about that in "I Miss the Mountains."  The meds smooth out the highs and lows and she ends up feeling nothing.  After the show, our Dan and Natalie, Jason Watson and Caitlin Kinnunen, came out to answer questions, along with Pearl Sun, understudy for Diana (who thankfully did not perform that night, no offense to Ms. Sun, but I would have been quite disappointed not to see Alice!).  They talked about what it's like to perform in such an important and well-respected show, what it's like to be an understudy, and several other topics.

I know I throw around the word "favorite" a lot, but if I were forced to pick my top five musicals, this would definitely earn a place on the list.  If you're a fan of theater (and if you're reading this blog you probably are), trust me, go see this show.  You will not be disappointed.  Emotionally spent, yes, but not disappointed.  It's not every day that a Tony-winner reprises her role here in Minnesota, so that alone should get you to the theater!  Add to that one of the best musicals written in the last decade, and it's really a no-brainer.  OK I'll stop now.  But really, go see it.  ;)

Here are Alice Ripley with original cast members J. Robert Spencer and Aaron Tveit performing "You Don't Know/I Am the One" at the 2009 Tony Awards.