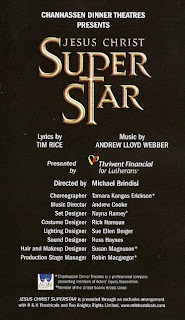 I don't think I need to explain to anyone what Jesus Christ Superstar is about (except for my sister, who asked me, so what's the show about?).  It's the story of, obviously, Jesus of Nazareth and the last days of his life, as told in the form of a rock musical by Andrew Lloyd Webber.  What I didn't realize going into the show, however, is that there's virtually no talking.  It's pretty much two and a half hours of straight singing, and pretty intense singing at that.  Unfortunately, the two leads - Ben Bakken as Jesus and Jared Oxborough as Judas - had the night off when I saw the show.  Their understudies did a great job, but Jared (who was so amazing as Che in Theater Latte Da's Evita last fall) is one of those actors I would go see in anything, and I like Ben too, so I was disappointed to see that dreaded slip of paper in the playbill.  That being said, it was another great night of theater at the Chan, if a little more heavy than usual.

The show began with a love-fest, people wandering onto the stage and greeting each other and their teacher Jesus with hugs and smiles.  But we soon find out that not everything is as pleasant as it seems.  Judas is not happy with the direction things are taking.  And Jesus is overwhelmed by his followers' adoration of him.  Mary Magdalene seems to be the only person who really understands his very human struggles, and soothes him with the song "Everything's Alright."  Michelle Carter gives a beautiful performance as Mary, especially the haunting "I Don't Know How to Love Him."  Both understudies gave a fine performance, as is usually the case.  Jake Klinkhammer as Jesus did an amazing job.  He has a beautiful strong voice and his performance of the song "Gethsemane," in which Jesus questions his fate, was powerful.  Even though Jesus is the title role, I think Judas has the larger role, driving much of the plot.  Broadway veteran Michael Gruber (who performed a charming tap dance with cast-member Tony Vierling at the Twin Cities Theatre Artists Support Japan benefit concert a few weeks ago) was Judas, and did a great job with the complex role.

The show was directed by Michael Brindisi and choreographed by Tamara Kangas Erickson, and they had a big job because there's a huge ensemble cast.  As usual at the Chanhassen, they're all great.  A lot of faces I recognize from countless shows, and I saw a few new ones too.  One of the highlights is the brief but entertaining performance by the always hilarious Jay Albright as King Herod.

The Chanhassen always puts on a quality performance with talented performers and this show is no exception.  It's a little darker and more intense than their usual shows, but really well done.