"The Homecoming" at Center Stage 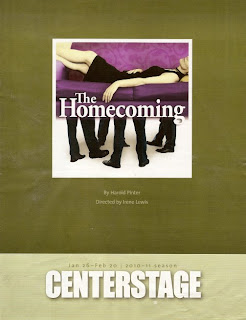 I went to Baltimore last weekend to visit my BFF and theater buddy, and to see my friend Trent Dawson in a play at Center Stage (the Guthrie of Baltimore).  If you ever watched the dear, departed soap As the World Turns, you  might know Trent as the lovable rascal Henry Coleman, a role he played for over ten years and for which he was nominated for three Emmys.  Since CBS cancelled the show last year after 54 years on the air, Trent has returned to his theater roots.  He did two shows off Broadway last year, and began this year in The Homecoming at Baltimore's Center Stage, where he's performed several times before.  The show also featured a couple of Minnesota actors: Steven Epp and Felicity Jones, both of whom worked at Theatre de la Jeune Lune for many years.  But I recognized Felicity as the ghost of Christmas past, a role that her twin sister Charity Jones played for several years at the Guthrie.  If I didn't know better, I would have thought they were the same person!  They share the same looks, voice, and talent.

The Homecoming was written by the English playwright Harold Pinter and won the Tony Award for best play in 1967.  It takes place in the London home of Max and his two grown sons, Lenny (Trent Dawson) and Joey.  The play opens with Max looking for a scissors, and Lenny ignoring him until he finally answers, "Why don't you shut up, you daft prat?"  That sets the stage for this funny and disturbing tale of a weirdly dysfunctional family, to put it mildly.  They hurl insults and physical violence at each other relentlessly.  The only sane one seems to be sweet Uncle Sam.  Into the crazy world comes the oldest son Teddy (Steven Epp), returning home after six years in America.  He brings along a wife that no one knew he had.  Ruth (Felicity Jones) is drawn into this mess of a family without much protest.  She seems to want her husband to pull her out of it, to demand that they leave together.  It's almost as if she's testing him.  But he just sits passively by and watches it happen, unable to do anything to stop it.  It's almost as if he expected it to happen.  Why he returned home to the zoo after he escaped I'll never understand, but family ties are strong.  It leaves one wondering what happened in this family that lead to this state, and why Ruth goes along with it so easily.  We're only given a part of the story, a small window into the crazy world of this family.

This quote from the playbill helped me make sense of the show, or rather, accept that I can't make sense of it: "Critics of The Homecoming often cite the play's intentional avoidance of clear-cut character motivation and easily digested meaning.  But for Pinter, drama that fits comfortably into understood, reassuring categories 'is not theatre but a crossword puzzle.  The audience holds the paper.  The play fills in the blanks.  Everyone's happy.  There has been no conflict between audience and play, no participation, nothing has been exposed.  We walk out as we went in.'"  This is definitely not a safe, comfortable play.  But good theater has the tendency to make one a little uncomfortable.  This was a wonderful production of a difficult play: great cast, fabulous period costumes, and a shabby chic set.

It was a fun weekend, catching up with old friends.  Baltimore's a fun little town (also home to one of my favorite shows, Ace of Cakes!), and Center Stage is a lovely and accomplished theater.