"Shrek: The Musical" at the Orpheum 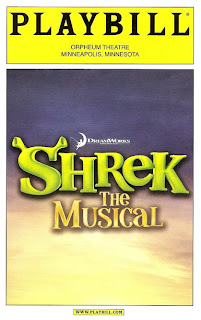 I'm not a fan of the current trend on Broadway of turning movies into musicals, so Shrek was never high on my list of shows to see.  But it's part of this year's Broadway touring season at the Orpheum, which also included several shows that I did want to see (Rock of Ages, Billy Elliot, and the upcoming HAIR and West Side Story).  I bought the season package, and didn't have very high expectations about Shrek.  So of course I was pleasantly surprised, as is usually the case.  This little movie-musical has pretty good theater credentials with book and lyrics by David Lindsay-Abaire (Pulitzer Prize winner for his play Rabbit Hole, which he recently adapted into a movie starring Nicole Kidman and Aaron Eckhart) and music by Jeanine Tesori (Thoroughly Modern Millie, Caroline or Change, and one of my favorite shows of 2010, Violet).  I found it to be charming and clever at times with some great songs and a fabulous cast.  It's a lot of fun, doesn't take itself too seriously, and has a great message for the many kids in the audience.

I'm sure everyone is familiar with the plot: ogre meets girl, ogre loses girl, ogre wins girl who really is an ogre herself, with many mishaps and much silliness along the way.  Eric Petersen is somewhere inside the Shrek costume and make-up and has a big strong voice and a charming presence.  But the star of Shrek in my opinion is Princess Fiona (Haven Burton).  She's not your typical fairy tale princess - crass and impatient and opinionated.  And that's why I like her.  Haven has a beautiful voice and natural presence on stage, especially in the charming "Morning Person" and "I Know It's Today," which she sings with two younger versions of herself.  Fiona and Shrek's chemistry is especially evident in the song "I Think I Got You Beat," in which they compare their difficult childhoods (kicked out of the house, locked in a tower).  Alan Mingo, Jr. has a really amazing and effortless voice coming out of a silly donkey's body, and David F.M. Vaughn gives an impressive performance on his knees as the vertically challenged Lord Farquaad.  It's actually quite fascinating to watch the choreography as he dances on his knees, short little fake legs hanging in front and a flowing cape to cover his real legs.  Another bit of choreography I enjoyed was that the misfit fairy tale characters, lead by Pinocchio (Blakely Slaybaugh).  Not only does he speak and sing in a high falsetto, a feat in itself, but the choreography really makes him look like a puppet.  When Pinocchio leads the fairy tale misfits in "Let Your Freak Flag Fly," it's impossible not to smile and cheer them on.  But I think my favorite character was the dragon who's guarding Fiona's tower; a large puppet manipulated by four ensemble members and gorgeously voiced by Carrie Compere.  In the song "Forever," she laments that everyone comes to save the princess and considers her just an obstacle in their way.  No one wants her.  She kills all of the knights except four, whom she keeps locked up as her backup singers.  Again, really interesting and beautiful choreography in the way the dragon puppet really comes to life and has a personality all her own.

I'm still stumped by how they do the Fiona transformation at the end - from human to ogre.  I was sure they had brought in another actress in full ogre make-up, but no one else came out at the curtain call.  I don't recall Fiona being offstage; I don't know how they got her in that get-up so fast!  Theater magic, I guess.  The show ends in the same way the movie does - with all of the characters (including an impossibly cute gingerbread man) singing the Monkees' "I'm A Believer."  Shrek is one of those shows that leaves you dancing and singing as you go out into the cold Minnesota night.

Shrek is a fairy tale for modern times; one where Prince Charming doesn't always show up to rescue the Princess.  And sometimes when he does, he's on ogre or a really short jerk.  And "beautiful isn't always pretty."  I guess if you're going to turn a blockbuster movie into a musical, that's not such a bad one to pick.