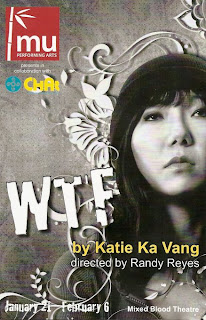 I was introduced to Mu Performing Arts a few years ago by a friend of mine who's on their board.  Over the last ten years or so Mu has grown to become one of the top Asian American theater companies in the country.  I've attended several of their shows, ranging from Tony-winner David Henry Hwang's semi-autobiographical play Yellow Face to the Rodgers and Hammerstein musical Flower Drum Song.  So when my friend said she had an extra ticket to their current production WTF at the Mixed Blood Theatre, I was in!

I'm not quite sure how to describe this play, so I'll let playwright Katie Ka Vang do it for me: "WTF is the story of the lives of young Hmong Americans living in today's society.  The characters in this piece all try to build a life for themselves.  Specifically, it follows the story of True and Sunday.  I wanted to magnify these two characters, who seem as through they just slide through life and simply just survive.  They do, but the way they choose to survive is more than just surviving."  That's an interesting way to put it, because at first True and Sunday are passive characters.  Sunday (Saikong Yang) is dealing with an over-achieving sister, opium addict parents, and an apprenticeship with a crazy artist.  True (the talented Sun Mee Chomet, who has appeared at the Guthrie in Macbeth, Intelligent Homosexual, and Two Gents) has recently lost her mother and has a strained and complicated relationship with her father (and his two other wives).  It's only when she gets pregnant that she begins to make choices to get her life back on track, as does her old friend Sunday, who agrees to make a life with her and her baby.

As much as this play is about the Hmong community, it's also a universal story of people dealing with the hardships of life.  Drug addiction, unexpected pregnancy, loss of a parent, a family member in Iraq, trying to find your place in the world, these are things everyone can relate to.  WTF also uses music, dance, and film to tell its story.  A text message is projected onto a screen onstage between scenes, which sets the stage for the upcoming scene (even if its meaning isn't always entirely clear).  True's boyfriend (Fres Thao) is a rapper/singer, and her soldier brother Rush (Billy Xiong) breakdances, as does the adorable 16-year-old Mimo Xiong.

We left the play not knowing quite what to make of it.  But director Randy Reyes says, "This play is not about finding answers, but rather about asking the right questions."  So I guess that's OK.

Mu's next production is the musical Little Shop of Horrors, which is on my list of shows to see in 2011.  I can't think of anyone better to play Seymour than Randy Reyes, and I can't wait to see what Mu does with this sweet and funny little musical.