"True West" by Torch Theater at the Minneapolis Theatre Garage 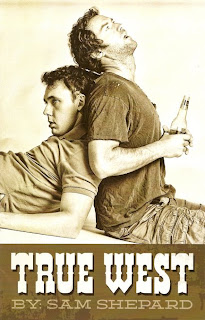 I received a tip about this show about a month ago, but I've been so busy I haven't had a chance to look into it until a few days ago.  Truthfully, I was hoping to rule it out because I have a pretty busy theater schedule in the next month, with more shows to add.  But when I saw that it stars John Skelley, one of my faves, and Peter Christian Hansen, who recently won an Ivey Award, I changed my mind.  This show was another must see, and I fortunately just caught it before it closed.

True West was written by American actor and playwright Sam Shepard and first produced in 1980.  It tells the story of two estranged brothers who meet up later in life.  Austin (John Skelley) is the younger brother and the responsible, mature, educated one who has a job, wife, and kids.  His mother has asked him to house-sit for her in L.A. while she's on vacation.  He's a screenwriter so he's using the time to do some research and writing, and as well as meet with an L.A. producer.  His older brother Lee (Peter Hansen) shows up and ruins his plans.  Lee is a drifter and a grifter, never staying in one place too long, making money however he can, legal or not.  The two brothers have reacted to their father's alcoholism and abandonment in opposite ways - one by being an overachiever and hoping to win his love, the other by becoming more like him.  But eventually, they end up at the same place.

Austin is writing a screenplay on an old typewriter (remember, it's 1980), and is about to sell it to his producer Saul (a slick and slimy John Middleton).  But instead, Lee runs into Saul, and charms and cons him into buying an idea of his.  Saul drops Austin's movie (a period love story, which "no one wants to see") for Lee's silly story about two idiots chasing each other across Texas.  Austin is furious and frustrated - "everything is riding on this" - which makes you wonder what else is going on in his life that makes him so desperate to sell this screenplay.  The brothers fight and argue as they work on the new screenplay based on Lee's story.  Austin goes from drinking milk to matching Lee beer for beer, and then they both continue on to the harder stuff.  The kitchen becomes a mess of empty beer cans and littered dishes and silverware.  Austin begs his older brother to let him join him on the road, living in the desert.  Lee agrees, but their plan is quashed when their mother comes home unexpectedly.  This feels like just a snippet of this family's life that makes you curious about what happened before and what will happen next.

This play really gets deep into these two characters and their relationship with each other and their parents.  And it's not pretty.  In fact, it's brutal, and very physical.  I couldn't help but wonder how many injuries were incurred throughout the run of the show.  The actors are probably glad not to be hurling themselves and each other across the stage every night.  But it sure was entertaining, if at times painful, to watch.  John and Peter are both great and fearless in creating these characters.  I remember seeing Peter in Dollhouse at the Guthrie last year.  He was so good at playing this jerk of a husband, that I wanted to boo him when he came out for the curtain call.  This was a similar experience; they're both good at playing unlikable characters, but somehow finding the humanity in them.

I can check another theater off my list, Torch Theater, whose Artistic Director is Stacia Rice, another one of my faves.  I've been to the Theatre Garage three times in the last few months and have really come to enjoy it.  It's pretty unassuming from the outside, but for $20 cash at the door you get to see some great theater in an intimate little space (so intimate in this case that I was glad I was not sitting in the front row because it appeared that the fights were about to spill over into the audience!).  Over the last year or so I've been going to more and more venues around town to see more and more theater companies.  And the more theater that I go to, the more theater that I'm led to, as I discover more and more favorite actors, venues, and theater companies.  This town is an interconnected web of talent.