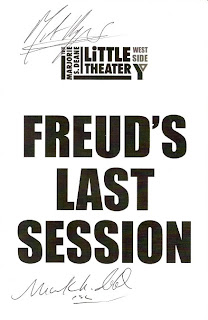 After four straight musicals (three on and one off Broadway), my theater buddy and I decided to conclude our New York City trip with a one-act Off-Broadway play.  We heard good things about Freud's Last Sesson (we always like to talk to the helpful people hanging around outside the TKTS booth, most of whom are young actors, and will give you the real scoop if you ask for it).  It's currently playing at the "Little Theater" in the West Side YMCA, just off of Central Park, but will be moving to New World Stages in October.  This new play written by Mark St. Germain ran from July through November of 2010, and was brought back in January due to popular demand.  It has gotten rave reviews; this move will hopefully mean that even more people get to see this intelligent, throught-provoking, moving play.

Freud's Last Sesson tells the story of a fictional encounter between two historical figures, Sigmund Freud (the founder of psychoanalysis) and C.S. Lewis (author of the Chronicles of Narnia).  It takes place in London in 1939, when Freud is 83 years old, having recently fled from his native Austria, and Lewis is 41 and teaching at Oxford University.  Freud is suffering from a painful cancer of the mouth (he died a year later).  In the fictional story, Freud contacts Lewis and asks him to visit him.  Lewis is initially nervous and unsure why Freud would want to see him, thinking possibly he offended Freud in one of his recent books.  It turns out Freud just wants to have a conversation with him.  Freud is an atheist, and is curious why Lewis converted from atheism to Christianity.  They have a long conversation about a number of topics, including religion, God, family, love, and sex.  They rarely agree, and really have no hope of changing each other's mind.  But it's obvious these two men have a great respect for each other as well as a willingness to have an open and non-judgemental dialogue about their beliefs.  Which is is an attitude I wish more people had.

This is a two-person cast, and both actors are marvelous and well-matched.  Martin Rayner is a kindly, curmudgeonly Freud, and Mark H. Dold plays Lewis with a deference to his elder, while still staying firm and confident in his beliefs.  As the play goes on Freud's pain increases to the point where it's almost painful to watch him, for the audience and the character of Lewis.  The pain of both characters is palpable due to the performances of the actors.  They've been playing these roles for over a year and have really settled into their characters.  With a play like this, I'm sure they find greater depth in the piece with every performance.

By the end of the play, nothing had been resolved.  I wanted them to keep talking so I could keep listening to their discussion.  My friend bought an (autographed) script; I'll have to borrow it so I can more deeply study this piece.  They discussed the German word Sehnsucht (one of those great German words that describe such a complicated concept it cannot be accurately translated).  Freud says that our deepest desires are never fulfilled, but to Lewis that's the definition of joy.  I'm not sure what to think about that, but think about it I do.