"Follies" at the Marquis Theatre on Broadway 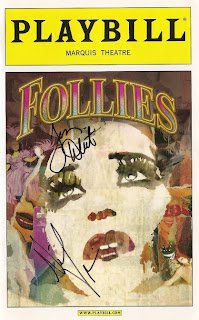 Bernadette Peters and Stephen Sondheim on Broadway.  That's all it took to get me to see Follies last weekend, a show that I previously knew nothing about.  Sometimes it's best to go into a show with no expectations.  I was blown away.  It's an absolutely stunning production.  From the set and costumes, to the huge veteran cast, to the gorgeous Sondheim music, it's an amazing musical theater experience.

Follies is set in 1971 and was first produced on Broadway that year.  It takes place in a theater about to be demolished and reunites the women who worked there in the 30s and 40s as "Follies girls."  The main characters are two erstwhile best friends, Sally (Bernadette Peters) and Phyllis (Jan Maxwell), and their husbands Buddy (Danny Berstein) and Ben (Ron Raines).  They comprise an awkward and complicated love quadrangle.  Buddy loves Sally but Sally loves Ben.  Ben only loves Sally until he has her, and then he wants Phyllis back.  As they reminisce about their past and their stories unfold, we also see the young versions of these four characters.  Their costumes are slightly faded, they're lit with a softer light, and even the sound of their voices is slightly echoing, like we're seeing visions from the past.  Sometimes the past and present action occur simultaneously.  The worlds overlap and we see the parallels between then and now.  It's really beautifully and effectively done.

The show opens with the orchestra playing the Prologue while beautifully dressed women walk slowly and elegantly across the stage, a run-down theater.  They're ghosts of the past, dressed in blacks and greys, with the elaborate headdresses of showgirls.  They continue to walk around or stand in the background as the present-day action goes on in front of them, and one or two even remain on stage during intermission.  There's a sad, wistful feeling about the show, and the costumes, set, lighting, and sound design all contribute to that feeling.

As I'm beginning to learn is typical in a Stephen Sondheim show, everyone in the large ensemble gets their moment to shine.  And they all just knock it out of the park - Mary Beth Peil slinking across the stage singing "Ah, Paris," Jayne Houdyshell singing the classic "Broadway Baby," Elaine Paige belting "I'm Still Here," and Terri White tapping up a storm in "Who's That Woman."  These women are all stars in their own right, but are in this show for one shining moment.  And the beautiful thing is that they're all over 50.  After seeing RENT starring a bunch of 20-year-olds (which is appropriate for the show) just the night before, it was nice to see mature, beautiful, talented, amazing women kicking it up on a Broadway stage.  That's a rare sight, and thrilling.

Follies celebrated its opening night just this week.  I fully expect and hope to see all four leads nominated come Tony time next spring.  They are all spectacular, especially the women, and each have their "folly" moment at the end of the show.  Danny Burstein (whom we loved in his Tony-nominated role in South Pacific a few years ago) does a funny vaudeville number ("The God-Why-Don't-You-Love-Me Blues") that is hiding deeper pain.  Jan Maxwell has a killer dance number with a bunch of dancing boys behind her.  Bernadette walks out onto an empty stage in a gorgeous purple dress and pours her heart out in song, as only she can do.  Finally, Ron Raines (one of those theater/soap crossover actors), comes out in a top hat and tails and leads the ensemble in a great song and dance number, until he falls apart at the mess he's made of his life.  It's not a happy ending, but it's a conclusion.  I felt like I had been on a journey with these people and shared a moment in their lives.

We waited at the stage door, but because it was a matinee before an evening performance, we didn't see any of the four leads.  But we did see young Buddy and the tap-dancing Terri White, who informed us that the cast was going into the studio in October to record the soundtrack.  I'll be watching for that.

Follies is on Broadway for a "limited engagement" after a run at the Kennedy Center in DC earlier this year.  I'm not sure how long the engagement will last, but it would be a crime for any musical theater lover who has the opportunity to see it, not to.  One could say that it would be folly to miss this show.