"Hamlet" at the Jungle Theater 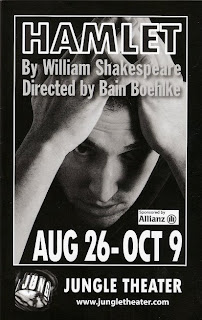 I have a season pass to the Jungle Theater this year for the first time.  And I have to admit, when I saw Hamlet on the list of shows, I wasn't overly excited as I've seen it a few times.  But I've never seen Hamlet like this.  It's a truly inventive production that manages to make it feel current without changing any of the language or meaning of the piece.

From the moment you walk into the intimate theater space at the Jungle, you know you're in for a truly unique Shakespeare experience.  Modern rock music is playing, and images and words are flashing across the screens onstage.  The action opens, not on a castle rooftop, but in the basement surveillance room, with a bored security guard flashing through security camera images of the floors of the castle.  It's through these cameras that the king's ghost is seen.  Hamlet's friend Horatio and one of the guards hop in the elevator to confront him while the other guard watches, as the action seamlessly moves from the stage to the pre-taped video.  It's an ingenious idea and flawlessly executed.  The use of images and videos appears in various parts of the play, as Hamlet scrolls through photos on his cell phone and the images are projected on screen, and later, as the queen watches the action of a party on a TV screen.  Yes, this is a modern-day Hamlet.  In addition to cell phones and TVs, characters also use laptops and iPads.  The costumes are modern, ranging from classic and refined (as in the queen's gorgeous wardrobe), to a more youthful and edgy look on Hamlet and his young friends.  The set (designed by Bain Boehlke, who also directed) is brilliant.  In addition to all of the audio-visual devices, it consists of huge columns that are moved around the stage to represent different areas of the castle.  The settings are as varied as a busy airport bar, the dark basement of the castle, and an airy breakfast room.  In between scenes, as the set is being changed, the time and setting of the scene are flashed on the screen, guiding the audience through the action.  This may sound like a lot of stuff going on that could distract from the story, but I found that it really enhanced it and drew me in.

I've seen Hugh Kennedy in a number of productions at the Guthrie and I've always liked him.  He's a very natural actor and has great charisma and stage presence.  But I've never seen him in a lead role like this (although I'm not sure there is another lead role like Hamlet).  His Hamlet is real and raw, tortured and crazy, lost and vulnerable.  You can feel his pain at the loss of his father and the changes it's brought to his life.  The words sound so natural coming out of Hugh's mouth, and Shakespearean language does not always sound natural.  He really made this play come alive for me.  I sometimes have difficulty concentrating on three plus hours of Shakespeare, but Hugh's performance, along with the inventive set design and contemporary setting, made it easy.

Bradley Greenwald (one of my favorite actors from the musical theater world) is deliciously smarmy and evil as Claudius, Hamlet's uncle and his father's murderer.  His voice is melodious even when merely speaking.  Michelle Barber is regal as Hamlet's newly widowed, newly wed mother Gertrude, who aches for her son and can't understand why he isn't as happy as she is with the new way of things.  The scene near the end of the play in which Hamlet visits Gertrude's room is particularly poignant and heartbreaking.  It's so nice to see Michelle outside of the Chanhassen (where she's a regular) and see what else she can do.  Gary Briggle (who was so wonderful in my favorite Fringe show this year, Twisted Apples) is also excellent as the King's councillor Polonius, and Erin Mae Johnson is a sufficiently crazy Ophelia.  I was happy to see Doug Scholz-Carlson from one of my favorite original musical theater pieces this year, Heaven.  He plays Ophelia's brother and Polonius' son, and has a wonderful fight/death scene at the end.

Hamlet is playing into October.  If you like your Shakespeare contemporary, real, and a little bit shook up, but still true to the original, you should check it out.  I probably don't need to warn anyone that it's not a short play; with three acts and two intermissions, it's well over the three hour mark.  I wouldn't recommend hanging out at a campfire until the wee hours of the morning a few nights before you see it (although the dollar Dunn Brothers coffee in the lobby helps).  Make sure you're well rested, fed, and watered.  You'll want to be alert for this one.