"The 7-Shot Symphony" by Live Action Set at Loring Theater 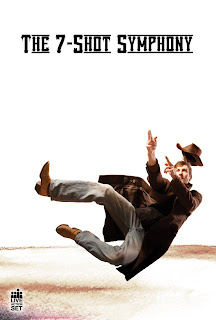 I first heard of Live Action Set at the Ivey Awards last year when they performed the entire Lord of the Rings trilogy in nine minutes (scroll to the bottom of this post to watch the video).  It was hilarious and brilliant, and I've had it in the back of my mind to check them out ever since.  So when I received an email from Artistic Director Noah Bremer telling me about their new show The 7-Shot Symphony, I decided it was a good time to finally check them out.  Live Action Set performs what they call "physical theater."  They don't have much in the way of props or set pieces; they act out everything with their bodies, from guns to trees to canyons to swinging saloon doors.  It almost reminded me of old silent films, except that there was of course sound (provided by the actors and members of local band Tree Party).  A note in the playbill says, "The creativity of non-literal depiction is what awakens the imagination.  And, this is what our theater does best - awaken the imagination."  They definitely succeeded in that with this piece!
The 7-Shot Symphony, an original piece written by Matt Spring and Ryan Underbakke (who also directs), is a re-imagining of several classic myths as a Western.  It's performed in seven "movements," like a piece of music, and each part tells a different story.  From the Epic of Gilgamesh (which was also the subject of a play I saw last fall called The Oldest Story in the World), to the Norse god Odin, to the Greek myth about Orpheus and Eurydice (which I was vaguely familiar with through Anias Mitchell's folk opera Hadestown), they all fit together in the end to complete the puzzle that is Deus county.  The seven actors take turns narrating the movements and playing the different parts, often changing characters in a matter of seconds with only a hat or a skirt or an accent or the carriage of their body to aid in the transformation.  It's really amazing how they create such specific characters; for the first half of the show I didn't realize that the actor playing Hades (Matt Riggs) was the same actor playing a few other roles, and it wasn't just the coat and top hat, it was the whole physicality of the character.  And that's just one example of the magic they create.
My favorite story was Orpheus and Eurydice.  In this incarnation, Orpheus is a frontiersman who borrows money from the evil Hades, owner of the Underworld saloon, to bring Eurydice to America from the "Old Country" to be his wife (similar to the plot of one of my favorite Minnesota-made movies, Sweet Land).  Eurydice can speak no English, so Orpheus (Joey Ford, a member of the band Tree Party) wins her heart by singing to her with the saddest and most beautiful yodeling I've ever heard.  It's a yodel that will break your heart.  Hades kidnaps Eurydice as payment on the loan, so Orpheus travels across the desert to find her.  When the lovers are reunited, Orpheus sings his song for her, and Jenna Wyse (also a member of Tree Party) as Eurydice adds her lovely voice to his.  It's a moment so beautiful that even evil Hades is moved.  He lets her go, but with a condition that tragically is not met.
There's not a weak link in this ensemble, which also includes Mark Benzel, Damian Johnson, Emily King, and Dustin Suggs.  They work and play together very well, and are all experts at creating not just characters but the whole environment in which the story takes place.  The Tree Party band provided a really cool country/rockabilly sound that makes me want to hear more from them.
I've seen several new (to me) theater companies in the last few weeks, and have been impressed with all of them.  The more theater I see, the more blown away I am by the talent in this town.  It's a beautiful thing.
And now, if you're a LOTR fan like me, enjoy this interpretation of the epic tale: