"HAIR" at the Orpheum Theatre 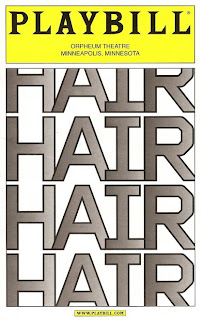 We starve, look
at one another, short of breath
walking proudly in our winter coats
wearing smells from laboratories
facing a dying nation
of moving paper fantasy
listening to the new told lies
with supreme visions of lonely tunes.

I don't entirely know what that means, but it's one of my favorite lyrics from the musical HAIR, from the song "Flesh Failures."  It's so wonderfully trippy and profound, somehow.  Which is how I feel about the musical.  It's rare that a show has such a powerful and meaningful and relevant message, and is so fun and entertaining at the same time.  My obsession with HAIR began several years ago when I saw a local production at the Pantages in Minneapolis (directed by Michael Brindisi of the Chanhassen Dinner Theatres).  Looking back on it now, the cast list reads like a Who's Who of the local musical theater scene.  I loved the show so much I saw it twice and bought the original Broadway soundtrack (from 1968), which I've been listening to ever since.  The Broadway revival opened in 2009 and won several Tonys, including best musical.  I saw it twice in 2010, when, not surprisingly, it was among my favorite shows of the year.

The night before HAIR opened at the Orpheum this week, I attended a talk sponsored by the Hennepin Theatre Trust as part of their Broadway Confidential series.  Dr. Richard Kagan, a history professor from Hamline University, and Dr. Megan Lewis, a theater professor from the U of M, spoke about the significance of HAIR in the history of musical theater and this country.  HAIR was written by two actors, James Rado and Gerome Ragni, along with music by Galt MacDermot, and was first produced off-Broadway in 1967 before moving to Broadway in 1968.  It was groundbreaking in many ways.  It was the first rock musical and paved the way for such shows as RENT.  It featured an interracial cast and interracial relationships, just a few months after the Supreme Court decision Loving vs. Virginia that declared unconstitutional laws preventing interracial marriage.  It broke the fourth wall and invited the audience into the experience.  It featured nudity and sexuality.  It was one of the first shows that was absolutely current and reflected what was going on just outside the theater doors.  At the height of the draft and the Vietnam War, they burned draft cards on stage.  It's truly amazing to think about what it would have been like to see this show at the time.  And sadly, even though it is a period piece, many of the themes are still relevant today.  Wouldn't it be nice to live in a time when fighting for racial and gender equality, peace and freedom for all, was an antiquated idea?

Since both the Broadway and London productions of HAIR closed last year (the original Broadway cast moved with the show to London in March of last year and the entire show was re-cast in NYC), many of the cast members from both tribes joined the tour.  Two actors from the original tribe reprised their roles: the magnificent deep-voiced Darius Nichols as Hud and Kacie Sheik as the sweet pregnant Jeannie.  The two leads, Claude and Berger, are also played by two original tribe members: Paris Remillard and Steel Burkhardt, who were the understudies on Broadway (Steel also took over as Berger midway through the London run).  The relationship between Claude and Berger is the heart of the show, so getting the chemistry of these two actors right is absolutely key.  And they struck gold with Paris and Steel.  They have such a comfort and friendship and chemistry between them, it's quite obvious they've been working together for years.  Similar to Gavin Creel and Will Swenson in the original tribe, you believe that these two are best friends.  Berger/Sheila/Claude is a true love triangle; the love goes in all directions.  Sheila loves Berger, and Berger loves Sheila, although he's a bit of a jerk to her.  And Sheila loves Claude because everyone loves Claude, and he loves her too.  But the greatest love exists between Claude and Berger.  When Claude decides to go to war, against all of his friends' advice, and is gone from their world, Berger is devastated.  Even right through the final song, Berger looks lost and confused without his best friend.  All throughout the show, Claude says that all he wants is to be invisible and make magic, and in the end, that's what happens.  He returns as a ghost and none of his friends can see him.  They walk off the stage, singing "Let the Sun Shine In" until their voices disappear into the lobby, and Claude is laying motionless on stage in his uniform.  "The rest is silence."  It's a powerful and somber ending to the show.

But then the cast comes back, the lights come up, and the audience is invited on stage to dance and sing with the tribe.  It's such a joyous show, and so heart-breaking at the same time.  Maybe that's part of why I love it so much.

If you'd like to learn more about "The American Tribal Love-Rock Musical," check out the Wikipedia page which discusses its themes and history at length.  And if you have a free night sometime in the next week, go see it!  But buy your tickets now as the show closes on Sunday March 6 and there are only a few seats left.  I'm so tempted to go again, but since I've got two other shows coming up in the next few days, I really shouldn't.  We'll see if I'm able to resist temptation.