As a self-proclaimed theater geek, it's no surprise that I listen to a lot of musical theater soundtracks.  I also love all of the music from Glee, or as I like to call it, a musical theater geek's TV dream come true.  (Glee has become my window into the world of popular music; I love to annoy my friends by saying "hey, it's a Glee song!" when I hear some classic song from the past or present.)  But if I'm not listening to musical theater or Glee music, my taste tends toward the folk/country/bluegrass/acoustic/singer-songwriter end of the spectrum.  Here are a few new CDs I can't get enough of.  Some are newly released, and some are just new to me.  Each artist has their own unique sound, but one thing they have in common is that they all write most, if not all, of their songs.  Anyone can sing, but to write a song that's meaningful and lasting and true, that's real talent.
Blake Thomas, Flatlands 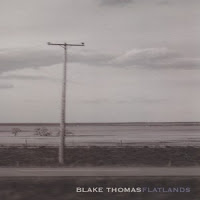 This CD was released in 2008 but I only recently became aware of local musician Blake Thomas through Yellow Tree Theatre's production of Our Town, in which he played the Stage Manager and provided the music.  I bought the Our Town soundtrack, featuring Blake and Mary Fox singing traditional American folk songs, and was intrigued by what I heard.  Blake's most recent CD Flatlands is a gem; it's everything I want country music to be that it isn't, at least not on the popular national scene.  With intelligent, thoughtful, poetic lyrics, a great country voice, a unique but familiar view of the world, it's just plain good.  "I Don't Want Your Heart, I Want Your Liver" is such a great title for a country song, I'm surprised it hasn't been written already.  "Please Cash This Check" might be the saddest song I've ever heard.  Every one of the 11 songs is a good one, mournful or funny or upbeat or clever, or all of the above.  If you're one of those people who "doesn't like country," don't let that label scare you; he really fits into the folk/singer-songwriter genre, but with a more country sound.  Check out this video of "World of War," which includes one of my favorite lyrics of many great ones, "The kind of rest that I receive in your arms, is so strange and pocket watch rare, if I couldn't put it down in song, I'd gladly cut off all of my hair." 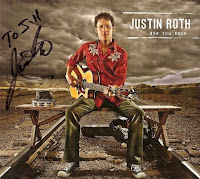 From the oldest CD to the newest - local singer/songwriter and amazing guitar player Justin Roth's latest is not actually released yet.  I pre-ordered it last year after seeing Justin at the folk music festival Storyhillfest, so I got an advance (autographed) copy and have been listening to it for a few months now.  The unique thing about this CD is that in addition to writing or co-writing all but one of the songs, Justin played and sang all of the parts himself, as well as producing and engineering the CD, so as to have total artistic control of the process.  I think that's a pretty cool idea, and the result is beautiful.  The opening track "This Winter" feels like it was written about this cold, snowy, long winter that I think has finally almost broken.  My favorite song is the final track, "Love's Not Through With Me Yet" (the only one he didn't write).  To get a taste of what the record is like before it's released in May, you can get a free download of the song "Trembling Like a Train".  Justin is one of the best guitar players I've ever seen live, and he's included a couple of instrumental tracks on the CD, including "There and Back Again" (I love a Tolkien reference!).   He does really cool and interesting things with a guitar.  If you want to know what I mean by that, check out this video:

Carrie Elkin, Call It My Garden 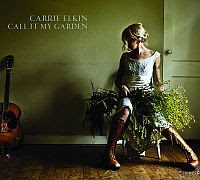 Another musical find from last year's Storyhillfest, Carrie Elkin has a new release on the St. Paul record label Red House Records (which features many great artists).  When I saw Carrie last year at Storyhillfest, I was blown away by her gorgeously clear and piercing voice.  Many of the songs she sang are on this newly released album, which is almost as good as hearing her voice live and in person.  I remember listening to her sing "Berlin" by the campfire one night and loving it.  Some of the songs have a little more of a country feel, some are hauntingly beautiful, like "Landeth by Sea."  This song and others also feature gorgeous harmonies courtesy of, among others, her beau Danny Schmidt (also a talented singer/songwriter, and photographer).  This video is of song that's not on her CD, but it's a gorgeous song written by Danny Schmidt, and I really love the way her voice sounds with Chris and Johnny of Storyhill. 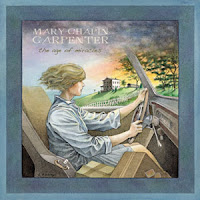 These next two musicians probably need a little less introduction, as you may have heard them on the radio a time or two.  I've long been a fan of Mary Chapin and have everything she's ever recorded.  She has this uncanny ability to write songs that sound like I could have written them myself, if only I had the talent.  I can listen to a song I've heard a hundred times before, and some lyric will jump out at me in a way it never has before.  That's good songwriting, friends.  If you only know Mary Chapin from country radio in the '90s, you need to check out what she's been doing since.  She releases a new album every couple of years, and they're always full of thoughtful, interesting, clever, great songs.  Age of Miracles came out last summer, but since I wasn't able to attend her concert, I sort of forgot to look for the new CD until recently.  I'm glad I finally remembered; this CD is another collection of great songs.  From the long, slow, gorgeous "Mrs. Hemingway" to the more up-tempo "Last Night I Put My Ring Back On" (I'm certain that's the golden-voiced Vince Gill singing back-up).  One lyric that jumps out at me is from the title track: "You think you're just standing still, but one day you'll get up that hill.  In the age of miracles, there's one on the way."  But my favorite changes daily; I feel like I could listen to this CD for the next two years and continue to find new things in it.  Here's "I Have A Need For Solitude" (another song I relate to): 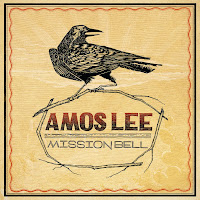 Amos Lee, Mission Bell
Amos is one of those singers whose voice just soothes me.  I often listen to him if I'm having trouble falling asleep.  That's not to say that his music is boring, it just calms me down and puts me in a place of peace.  The title of his fourth CD comes from the song "El Camino," a beautiful song either solo or as a duet with Willie Nelson (both versions are on the CD).  Lucinda Williams also duets with Amos on "Clear Blue Eyes."  The song "Windows Are Rolled Down" sounds like what it feels like to go driving on a warm spring day with the top down (something I'm anxiously awaiting).  He's performing tomorrow night at the State Theatre in Minneapolis, and I'm regretting not getting tickets!  Ellen likes Amos too, in fact I think this is how I heard about the new CD: 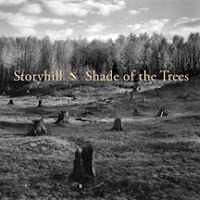 I should give honorable mention to the group whose magical little music festival led me to some of these and other favorite new artists and CDs, and whose 2010 CD Shade of the Trees has literally not left my car CD player in almost a year.  Storyhill features the beautiful harmonies of Chris Cunningham and John Hermanson, and they've written some pretty good songs themselves.  Check them out.  And to go back even further, I probably wouldn't know Storyhill if it weren't for the dear departed MPR morning show with Dale Connelly and Jim Ed Poole (aka A Prairie Home Companion sound man Tom Keith).  You can get some of the same eclectic selection of music on Radio Heartland, but sadly without the witty and clever commentary.
Here's Storyhill singing my favorite song from the new CD, "Better Angels," at last year's Storyhillfest.  (Tickets for this year's Storyhillfest over Labor Day weekend are now on sale.)


*All of the above music is available on itunes.  You can also visit each artist's website by clicking on their name, where you can find more info about them and how to order a physical CD, in case anyone still does that anymore.  ;)  Happy listening!