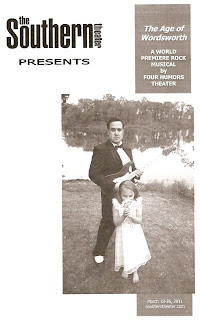 Four Humors Theater's original new rock musical The Age of Wordsworth is bizarre and super cool.  Even though rock music isn't really my thing, I'm a huge fan of the genre of the rock musical, which began with HAIR in 1967 and continued through my favorite musical RENT in 1996, on through to some of my favorite recent musicals such as Spring Awakening and Next to Normal.  But the show that The Age of Wordsworth most brought to mind is last year's fabulous new Broadway musical Bloody Bloody Andrew Jackson.  Both shows reimagine a historical figure, mixing fact and legend with great rock music and a spirited young cast.  And like when I saw BBAJ last October, I was intrigued by the title character and had to go home and google him to find out more about his life, and find out how much of what I saw is true.

The spacious and gorgeous space at The Southern Theater is set up with a square of artificial grass on the right-hand side of the stage, filled with instruments and musical equipment.  That's where the cast performs the musical numbers, interspersed with stories about Wordsworth which are acted out on the rest of the stage.  The actors take turns playing the English Romantic poet William Wordsworth and other historical characters, such as his friends Mary Wollstonecraft Shelley (author of Frankenstein) and Samuel Taylor Coleridge (inventor of the concept of suspension of disbelief).  From being haunted by one of his own creations, to waiting for 20 years on the French border to see his wife and child, to being lost at sea, to his wedding, the stories are funny, touching, and a little bit crazy.  The wedding story takes the form of a drunken best man's speech, and the actor giving the speech is so convincing as a drunk that for a moment I was afraid he really was ill!


Most of the musical numbers are based on poems by Wordsworth or his contemporaries, with additional lyrics by Nicholas Jacobson-Larson, who also composed the music with help from the ensemble.  According to the creator and director of the show, Jason Ballweber, the show is centered around Wordsworth's poem "We Are Seven," which is one of the songs.  Some of the songs are sad and haunting, others are loud and rockin.  Just before the doors opened for seating (I was there early because, annoyingly, my ticket said 7:30 when the show really started at 8), Jason spoke a few words about the show, which ended with "please take ear plugs if you wish."  I didn't, and I survived just fine. 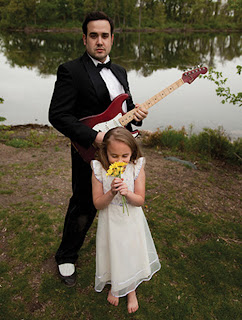 I'd like to point out my favorites in the cast, but since the playbill does not include photos or a cast of characters, I don't know who is who.  So I'll just list them all and say they're all talented and energetic young actors and musicians, many of whom graduated from the Univeristy of Minnesota's theater program or are currently students there: Ben Desbois, Ryan Lear, Alisa Mattson, Brant Miller, Tyler Olsen, Rachel Petrie, Mark Rehani, Toby Rust, and Matt Spring.
Most of the theater that I see is fairly conventional, but I'm trying to branch out, which is why I purchased a season package at the Southern Theater.  In addition to dance, music, and film, the Southern hosts smaller theater companies doing new, original, avant-garde work.  So far, I like what I see, and I love the creativity and outside-the-box thinking that continues to advance theater in a forward direction.  (And since I really love the image on the playbill, but the effect is somewhat lost in black and white, I'm repeating it here.  The imagery of flowers plays an important and lovely role at the end of the show.)