"The Winter's Tale" at the Guthrie Theater 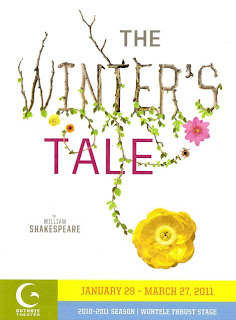 I love it when the Guthrie sets a Shakespeare play in a specific time period of the last century, whether it's the psychedelic '60s version of As You Like It, or Two Gentleman of Verona reimagined as a televised play in the 1950s.  I sometimes have a hard time with Shakespeare and really have to concentrate on the words, and somehow setting it in a different time period makes it more enjoyable and understandable.  With The Winter's Tale, you get two for the price of one!  There are two distinct worlds in this production of one of Shakespeare's later plays: the elegant, refined Sicilia and the rustic, rural Bohemia.  It almost felt like two separate plays, and there was one I liked better.

The play begins with a party scene in Sicilia.  I walked into the theater a few minutes before the show started to find the dancing in full swing, accompanied by the lovely voice of Christina Baldwin, the women in gorgeous dresses and the men in tuxes.  The dancing ended and the action of the play began.  I had a little bit of a hard time following, but basically it's the case of a jealous husband seeing things that aren't there.  Leontes, the king of Sicilia, suspects that his wife Hermione and his best friend Polixenes, king of Bohemia, are having an affair.  Leontes asks one of his men, Camillo, to kill Polixenes.  Seeing that his king is crazy, Camillo instead warns Polixenes and flees with him to Bohemia.  Leontes imprisons his wife, who gives birth to a baby and dies from the stress of the trial.  Leontes banishes the baby, who is found and brought up by a shepherd in Bohemia.  The action of the play then shifts from the icy blue formality of Sicilia to the flower-filled hippie hoedown that is Bohemia.

The second act takes place sixteen years later, when the "shepherd's daughter" Perdita, who's really a princess, is all grown up and has fallen in love with King Polixenes' son Florizel.  The king dons a disguise (I love how in Shakespeare's play, all it takes is a wig and a costume for someone not to recognize someone they've known their whole lives) to spy on his son as he cavorts with the peasants.  Once he sees what's going on, he forbids his son to marry a mere shepherd's daughter.  At the urging of Camillo, Floizel brings his betrothed to Sicilia to visit his father's old friend.  It's soon discovered that Perdita is the king's daughter, and the king, having recovered his sanity and mourned his mistake for the past sixteen years, makes amends with his daughter and best friend.  They go to visit a statue of the deceased Hermione, only to find that the lifelike statue really is the woman herself, alive and in hiding all these years.  And they all live happily ever after.

As usual at the Guthrie, this is a stellar cast.  Relative newcomer Michael Hayden as the jealous king transforms from complete lunacy to quiet remorse.  Guthrie faves Bill McCallum and Michele O'Neill complete the love triangle as Polixenes and Hermione.  Michael Thomas Holmes steals every scene he's in as the singer/thief/traveling salesman Autolycus, as does John Catron as the shepherd's son (they also share a pair of hippie jeans in a sort of sisterhood of the traveling pants situation).  Christine Weber and Juan Rivera Lebron are sweet and sincere as the young couple in love.  The rest of the cast includes too many Guthrie faves to mention.

I enjoyed the hippie bluegrass hoedown Bohemia part of the play more than the icy elegant "winter" Sicilia, but they came together at the end in a satisfying way.  This is a long play (three hours including intermission), but entertaining and well done in the Guthrie tradition of big expansive "period" Shakespeare productions.