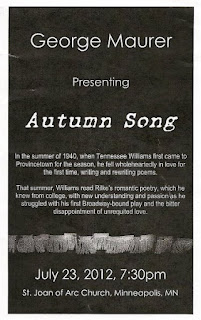 As I've said before, I'm not really into poetry. I have a hard time getting anything out it when I try to read it. But when it's set to music, it's a whole different story. Accomplished local composer and pianist George Maurer has set several poems of German poet Rainer Maria Rilke to music, interspersed with a few poems by Tennessee Williams. This initially seemed like an odd couple to me, until I learned that Williams was a poet in addition to being a playwright (one of my favorites), and he was inspired in his writing by the writing of Rilke. George and director Jef Hall-Flavin have imagined a dream-like conversation between the two, consisting entirely of music and poetry. A cross between a concert and a theater piece, Autumn Song doesn't have much in the way of plot or story, but instead it brings the poetry of Rilke to life. It's a beautiful creation.

The evening begins with Jared Oxborough as Tennessee Williams entering like a character from one of his plays, like Brick or t was hot enough in the gym of St. Joan of Arc church to believe we were in Williams' Southern home). He begins reading a book of Rilke poetry, when the poet himself (played by Dieter Bierbrauer) appears as if in a dream. The two men interact and sing alternately or together, mostly Rilke poems and a few Williams poems as well. A few visions wander through, representing the objects of the two men's affection – Rilke's played by Dieter's real-life wife Anna, and Williams' played by Caleb Carlson, a promising young actor I've seen recently in Julius Caesar and Our Class. Despite the lack of dialogue or exposition, it's obvious that Williams takes inspiration from Rilke, so that by the time that Rilke leaves at the end of the piece, Williams is able to write again.

There is much talent and collaboration present in Autumn Song. This is George's passion project, his Sistine Chapel (read a nice interview with George about the project here). He has done a beautiful job of setting these poems to music of varying styles in a way that makes them most clear and alive. George (on piano) and his band (cello, bass, drums, sax) sound fantastic, and he could not have chosen two better singers than Jared and Dieter, who both appeared on their day of from their current regular gig (Jared is in the lush old-fashioned musical Roman Holiday at the Guthrie, while Dieter is starring in the super-fun spoof Xanadu at the Chan – my two must-see musicals of the summer!). Individually, each of their voices are gorgeous, and matched by their acting skills. Blend these two voices together and you have some incredible harmonies (there's not much I like better in music than a good harmony). And their combined acting skill makes you feel the emotions of the characters, which is more important than the literal interpretation of what's happening. They don't just sing the songs, they portray the emotions behind the words and music. George's bass player Jeff Engholm takes the lead for the final song, "Autumn Days," (in what I like to call a "Purple Summer" moment), as Dieter and Jared add their harmonies. It's the first Rilke poem George set to music, and it's a glorious celebration:

Lord, it's time. The summer has gone by.
Darken the sundials with your shadows,
On the meadows let the wind go free.

Command the fruit to swell on tree and vine;
Grant them a few more transparent days,
Urge them on to fulfillment, and press
The final sweetness to the heavy wine.

As I've also said before, I'm a geek for the German language (see Werther und Lotte and Ich bin meine eigene Frau), having studied German at St. Ben's/ like George did, where he was introduced to Rilke in his German classes. While Rilke's poems are translated into English for this piece, there's still that inherent German-ness in it that makes me want to attempt to read a few poems in the original language. I'm only marginally familiar with Rilke, and with Williams only as a playwright not a poet. So I appreciate getting to know both of these artists and their work a little better.

George and company will next take Autumn Song to the Tennessee Williams Theater Festival in . They have a Kickstarter campaign to help to fund this effort (click here to view video and back the project). I wish them much luck in this endeavor and am grateful to have gotten a sneak peek. 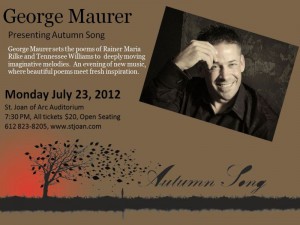 I'll leave you with a few poems my Rainer Maria Rilke, as sung in Autumn Song (you can read the entire libretto here).

I Love the Dark Hours
I love the dark hours of my being
My mind deepens into them.
There I can find, as in old letters,
The days of my life, already lived,
And held like a legend and understood.
I Live my Life in Widening Circles
I live my life in widening circles
that reach out across both earth and sky
I may not ever complete the last one,
but I give myself to
circling 'round God, that primordial tower
I've been circling ten thousand years long;
yet still I don't know:
am I a falcon,
am I a storm, or an unfinished song?

To the Beloved
Extinguish my eyes,
I'll go on hearing you.
And without a mouth, I can swear your name.
And without feet, I can make my way back to you.
Break off my arms,
I will take hold of you
with my heart as with a hand.
Stop my heart
and my brain will start to beat.
And if you consume my brain with fire,
I’ll feel you burn in every drop of my blood.

Sonnet 29
What is the deepest loss that you have suffered?
If your drink is bitter, turn yourself to wine.
Be in this night of a thousand excesses,
The magic at the crossroads of your senses.
In this night of a thousand excesses
Be what their strange encounter means
And when the world no longer knows your name?
Say to the earth: I'm flowing
Speak to the rushing water, and say:
I am.