"Basic North" by Live Action Set at the Southern Theater 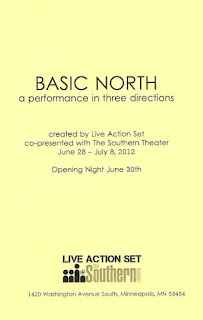 The bare, cavernous, gorgeous stage at the Southern Theater. That's about as exciting as it gets in the world of theater - you never know what magic is going to happen in that big open space in front of you. Currently, it's Live Action Set's new creation Basic North: a performance in three directions. But I didn't see three directions, I saw one cohesive piece, where one "chapter" flows into another and back again. I don't want to say too much about the show, firstly because it's difficult to describe, but mostly because it's the surprise factor that makes it so delightful. I really had no idea what to expect, and I was entertained, moved, amused, and yes, delighted by what I saw.

The three chapters consist of:

I'll end this with a quote from one of the performers, Joanna Harmon, who's also the Executive Director of Live Action Set: "It takes guts to say, 'Surprise me! Show me what ya got! Throw me a curve ball,' and with joy, choose to experience a show in which you have never before been immersed." If that sounds at all intriguing to you, then you should definitely catch one of the remaining five performances. And if you missed last year's brilliant and Ivey Award-winning 7-Shot Symphony, you might also want to check out the one-night-only performance of the show, along with a CD-release party (from the bluegrass band Tree Party) on Monday July 2, also at the Southern.