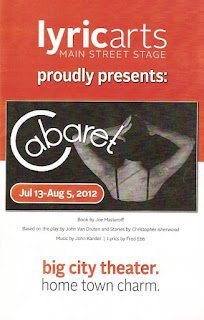 One of my favorite shows last year was Frank Theatre's Cabaret, starring Bradley Greenwald and Melissa Hart (from the original Broadway production of the show). So when I attended a production at Lyric Arts Main Street Stage* in Anoka, I tried to put that out of mind, knowing that it was unfair to compare the two. But I was really impressed by the production. All of the leads are great in their roles, the Kit Kat girls are fantastic, the set is interesting and effective, and Cabaret is in my opinion one of the best musicals ever written. I love that it's wildly entertaining and fun and sexy, but also has an undercurrent of desperation just below the frivolity on the surface. Lyric Arts does a great job with both parts in their production running now through August 5.

Cabaret takes place in pre-WWII Berlin, just before the rise of the Nazis. It's the end of the relatively calm period in Germany between the World Wars, just before everything falls apart. And that's the desperation you can feel throughout the piece, that sense that something awful is coming, which the characters in Cabaret choose to deal with by living life as fully and as presently as they can, epitomized by Sally Bowles. She's the star of the Kit Kat Klub, living from day-to-day, man-to-man, painting her fingernails green because "I think it's pretty." She meets Cliff, an American writer, and they live happily together for a short time before the darkness that's brewing in Berlin starts to become apparent. He wants them to return to America, but Sally isn't a housewife in the suburbs kind of girl. She chooses to remain in her beloved Berlin, for better or worse.

As a resident of the Northeast suburbs, I've been wanting to check out this Anoka theater for a while now. It's a nice little theater (and they sell popcorn in the lobby!), and this was a great first show for me. A few of the shows on their 2012-2013 season appeal to me so I'm sure I'll be making the trip again. Cabaret is definitely worth it, especially if you live on the Northern side of the Cities. I love the idea of a true community theater in the suburbs, so you don't always have to drive into the city to see great theater, and Lyric Arts definitely fits the bill.


*I received one complementary ticket to see Cabaret.