What a year it has been!  In my first full year of having this blog, I made a conscious effort to see more diverse local theater.  The result is that I doubled the number of Minnesota theater events I attended, from around 40 last year to around 80 this year.  Not counting the Minnesota Fringe Festival and touring productions, I saw shows by almost 30 different local theater companies.  That's not even half of the theater companies in Minneaplis/St. Paul, so I have much more to do next year!

Here are a few of my favorite shows from this year (in alphabetical order).  Click on the title of each show to read my full thoughts at the time I saw it.

It's a safe bet that a Latte Da show will appear on my year end favorite list every year.  I loved this delightful musical about a bunch of misfit middle school spellers so much, I saw it twice.  Sweet and funny with a super talented young cast who perfectly embodied the eccentric kids, this was another hit from Theater Latte Da.

Cabaret, Frank Theatre
This was an unexpected highlight of the year: a classic musical by Kander and Ebb, starring one of my favorite local actors (Bradley Greenwald as the emcee) and a member of the original production (Melissa Hart as Fraulein Schneider), produced in the darling little theater on the Minnesota Centennial Showboat.  It's such a rich piece of theater, heart-breaking and wildly entertaining, and new-to-me Frank Theatre did an amazing job with it, as well as facilitating a wonderful post-show discussion on the afternoon I attended. 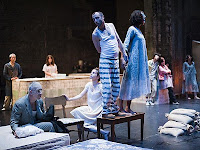 Early this year, I went to Baltimore to see a friend of mine in the weird and wicked play The Homecoming, coincidentally also starring Minnesota actor Steven Epp.  I'm almost embarrassed to admit I wasn't very familiar with him at the time, having never seen a Jeune Lune show before they closed up shop.  But now I know - he's kind of brilliant.  Steven and Dominique Serrand of Jeune Lune have a new theater company, and this year they presented the original piece Come Hell and High Water, based on a William Faulkner story about a flood in New Orleans (no, not Katrina, although that's certainly brought to mind).  I don't even know how to describe it; there was music, movement, story-telling, and water.  A lot of water.  What I loved most about this show is that it was unlike anything else I've ever seen.  It's a thrill to see something so completely original. 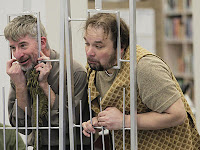 Don't make me choose between these too amazing productions by Ten Thousand Things!  They brought their completely unique, bare-bones, intimate, authentic style of theater to these two different plays - one a short, serious exploration of child abuse in the Catholic Church, the other a beloved musical about a man with a dream.  Each with a brilliant cast (Sally Wingert and Kris Nelson in Doubt, Steven Epp leading the way in La Mancha) that shined without elaborate sets or lighting to distract from the work of bringing the story to life, I couldn't possibly pick a favorite between the two.  They were both heart-breakingly beautiful in their simplicity and truth.

Hamlet, Jungle Theater
I admit it - I have a hard time with Shakespeare.  It takes me a while to get inside the language and really feel what's going on.  But I didn't have any problems with the Jungle Theater's production of Hamlet this year.  Bain Boehlke designed the inventive set and directed the fabulous cast, led by Hugh Kennedy as a very real Hamlet.  The whole production felt utterly modern and current, including innovative use of video, while still remaining true to the original work.

Heaven, Flying Foot Forum
I really loved this original dance/music/theater piece by Joe Chvala and the Flying Foot Forum.  I had no idea what to expect walking into the Guthrie's studio theater, and was blown away by the story of an American journalist in the Bosnian War, and the way it was told through music, dance, and images.  This is what musical theater can and should be: original, relevant, inventive, moving, and full of wonderfully diverse music and dancing.  And for some inexplicable reason, this is the most viewed page on my blog, with twice as many views as the next highest page.  It makes me think that maybe they're shopping the piece around trying to find new life for it, which makes me happy.

Ma Rainey’s Black Bottom and Two Trains Running, Penumbra Theatre
2011 was the year I was introduced to August Wilson's ten-play cycle about the African American experience in the 20th century, although really it's about the American experience.  Ma Rainey is about a jazz singer in the 1920s and the musicians that play with her, and the struggles they face amidst the racism of the time.  Two Trains tells the story of the patrons and owner of a diner in a 1960s neighborhood that's disappearing.  Both are brilliant studies of life and history and characters.  And no one does it better than Penumbra Theatre, which has produced more August Wilson plays than any other theater in the country.  I look forward to next season's selection.

Pride, Pillsbury House Theatre
This might have been the most difficult play to watch this year; there were some brutally violent scenes.  But it was also very moving and meaningful and well done.  Four actors all played multiple characters and depicted the story of two gay men and the woman who loves them, in two distinct time periods - 1958 and 2008.  Tracey Maloney, Matt Guidry, and Clarence Wethern all brilliantly portrayed two different versions of the same character, one in each time period.  Subtle changes in voice, wardrobe, and carriage of the body instantly let the audience know which time period was being presented.  The play illustrated just how far we've come in 50 years, and that we still have a ways to go. 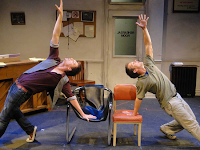 [title of show], Yellow Tree Theatre
Musical theater is my favorite thing in the world, so a musical that celebrates (and maybe pokes a little fun at) musical theater is bound to be on my list of favorites.  This musical about two guys writing a musical about two guys writing a musical is hilarious and full of musical theater references.  It was a perfect choice for the cozy intimate stage of Yellow Tree, my favorite little theater in the suburbs.  The fabulous four-person cast (Jessica Lind, Mary Fox, Andy Frye, and J.C. Lippold) had as much fun as the audience.  It also gave me a new motto: "I'd rather be nine people's favorite thing than a hundred people's ninth favorite thing."

Twisted Apples, Nautilus Music-Theater at the Fringe Festival
This was my first year attending the Minnesota Fringe Festival, and I loved it.  I saw ten shows in a little over a week (a record even for me), some funny, some moving, some weird, but all in all a wonderful sampler of the talent in the Twin Cities.  My favorite show of the Fest turned out to be one of my favorites of the year - the original music-theater piece Twisted Apples by Nautilus Music-Theater, the second of three short operas that will eventually make up a full three-act opera based on Sherwood Anderson's 1919 short story cycle Winesburg, Ohio.  Led by a gut-wrenching performance by Norah Long, it completely captivated me and brought me into the world of the little frontier town, so much so that I found the sunshine outside jarring when I left the theater.  I look forward to next year's installment.

Since it's hard for me to pick just ten, here are ten more shows I loved: 7-Shot Symphony, After Miss Julie, August: Osage County, Avenue Q, Burial at Thebes, Edge of Our Bodies, H.M.S. Pinafore, I Am My Own Wife, Little Shop of Horrors, and Wizard of Oz.


In addition to the above plays and musicals, there are a few artists whose work stood out for me this year, whom I saw multiple times in wonderfully diverse productions.

Bradley Greenwald appeared in two of my favorite shows this year, and I don't think that's a coincidence.  From the emcee in Cabaret to a German transvestite antiques collector in I Am My Own Wife, and everything in between ("everything" in this case being Hamlet's murderous uncle and a buffoonish soldier on the Way to the Forum), he's always a joy to watch.  Whether he's speaking or singing in that magnificent voice of his, in English or in German, he puts everything he's got into his performance, and I can't get enough.

Unlike my other two favorite artisits, I didn't know who Anna Sundberg was before July of this year, although I had probably seen her before.  But this fall she starred in three fantastic and diverse plays by three different theater companies, showing great range in playing a woman among immigrants in early 20th century NYC (Girl Friday's Street Scene), a very modern woman dealing with relationship issues (Walking Shadow's reasons to be pretty), and the entitled daughter of the owner of a large estate in 1940s London (Gremlin Theatre's After Miss Julie).  Oh, and she won an Ivey Award for emerging artist, so I guess I'm not the only one who took notice.

I have to admit I don't usually pay attention to the director of theater or movies.  I'm never quite sure what to attribute to the director vs. the cast or the writer.  But here's what I do know: every play or musical directed by Peter Rothstein that I've seen has been excellent theater, so he must have had something to do with it.  It's always high quality work from top to bottom, beginning with the seemingly perfect cast he assembles.  Whether it's with Ten Thousand Things (the thought-provoking Doubt, see above), The Children's Theatre (two shows that'll make you feel like a kid again, Annie and The Wizard of Oz), a joint production between the Ordway and 5th Avenue Theatre in Seattle (the colorful and entertaining Guys and Dolls), or his own Theater Latte Da (the moving Song of Extinction; an original piece about immigrant music that he created with pianist Dan Chouinard, Steerage Song; and the delightful Spelling Bee), a Peter Rothstein directed show is always entertaining, or interesting, or thought-provoking, or hilarious, or heart-breaking, or moving, or all of the above.


Those are just a few of the things I loved this year in the rich and deep world of theater in Minnesota.  Thanks to anyone who read my blog this year, posted comments, emailed me with show suggestions, offered me free tickets to come to their show, or went to the theater with me.  It's such a joy to experience the amazing theater in this town and to get to share my experiences, thoughts, and feelings with you all.


P.S. I only made it to New York once this year, but I did pretty good.  I saw three of the best Broadway musicals of the year (The Book of Mormon, How to Succeed in Business without Really Trying, and Follies), and two off-Broadway shows I really enjoyed (a new production of my favorite musical RENT, and the thought-provoking two-person play Freud's Last Session).  I've already started my list of new shows I want to see, so hopefully I'll get back to NYC again soon!