"I Wish You Love" at Penumbra Theatre 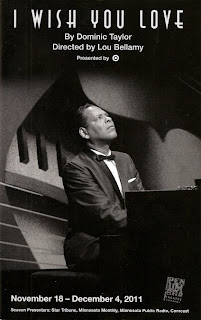 It's not often that you get a second chance to see a production you missed.  Every year at the Ivey Awards I'm presented with several wonderful productions and performances that I didn't see.  I always wish they'd bring back the productions so I could have another chance to see them, and this year my wish came true!  Dennis Spears won an Ivey for his performance as Nat King Cole in I Wish You Love by Penumbra Theatre earlier this year, and after touring with the show in Washington DC and Connecticut, they brought it home to their St. Paul theater for another run (now through Dec. 18).  I'm so glad I had the opportunity to see it.  Not just for Dennis' award-worthy performance, but also because it's another quality, thought-provoking, moving production by Penumbra.  I was lucky enough to attend on a day when there was a post-show discussion led by Education Director Sarah Bellamy, which was, as always, enlightening and illuminating about the topics surrounding the show (if you ever get a chance to go to a talk-back at Penumbra, take it).  The more I see of Penumbra, the more I love them.  Like me, they believe that theater is more than just entertainment.  Theater has the power to start conversations and change the way we view the world.

I Wish You Love is a Penumbra original; written by Dominic Taylor, head of Penumbra's new play development program, and directed by Artistic Director Lou Bellamy, it premiered at Penumbra earlier this year.  The play is a fictionalized account of Nat King Cole's 1957-1958 TV variety show, the first hosted by an African American.  The sponsors were skittish, and Cole ended up putting his own money into the show to keep it on the air.  The play branches off from that and shows us the racism behind the scenes of the show; the network and sponsors didn't want any of the black band members to appear on camera, and Nat received death threats.  The network insisted he go on a national tour to prove his national popularity, ending in his birthplace of Alabama (he grew up in Chicago).  This was during the height of the Civil Rights movement and the violence surrounding it.  Nat and his band were caught up in the violence, which brought a whole new reality to what they were seeing on the news every night.

The scenes in the play cover rehearsals, breaks, and the TV show itself.  Video images are beautifully and effectively woven into the live action on the stage.  When the show goes live, a camera in the back of the theater videotapes what's going on onstage, which is simultaneously broadcast on several black and white TVs hanging over the stage.  It feels like we're at a live taping of "The Nat King Cole Show," complete with "Applause" signs and vintage commercials that come on during the breaks.  We also get news reports of the growing violence in the South and see real news footage projected onto the screens.  It's quite a contrast between the smooth, pretty music in the TV studio and people being beaten on the streets in the news footage.

I'm not that familiar with Nat's music (other than his Christmas album and his posthumous duet with his daughter Natalie), but I've been watching some videos of him on youtube, and Dennis Spears seems to have captured his mannerisms, his voice, and his spirit.  You see two Nat King Coles in I Wish You Love - the smiling public face, and the behind the scenes real man who is frustrated with the sponsors and the network.  As soon as the countdown to live TV begins (five, four, three, two....), Nat puts on his million dollar smile and speaks to the camera, and to his audience watching at home.  And then he sings in that familiar velvet voice (musical direction by Sanford Moore).  As soon as the cameras are turned off, reality sets in and he lights up a cigarette (Nat died of lung cancer at the age of 45) as he interacts with his band or the producer.  Nat's band members (inspired by his real life trio) are played by the always great Kevin D. West as the bass player and long-time friend of Nat's, and newcomer to the Twin Cities theater scene Eric Berryman as the young guitar player Nat takes under his wing.  We learn more about Nat and his life and goals through the stories, jokes, and pain he shares with his friends.  The show's producer, who does the best he can for Nat within the restrictions placed upon him, is played by Michael Tezla (my co-star from A Serious Man).

In what turned out to be a fascinating and completely unplanned but somehow serendipitous pairing of theater, I saw the Chanhassen's production of Hairspray the same weekend that I saw I Wish You Love.  Both shows are set in a similar time period and deal with segregation.  Both explore the use of TV and music to help break down the barriers between the races, but in very different ways.  Hairspray is a fairly simplified version of events, in which everyone ends up happily and peacefully dancing together, and it's a white girl who leads the way.  I Wish You Love is a much more realistic view (we see several violent images that are hard to look at) of the struggles of African Americans that continue to this day.  There is no happy ending for Nat King Cole, just continued struggle, and progress mixed with setbacks.  Both shows deal with an important and unpleasant part of our history that really wasn't all that long ago.  I found that they complemented each other nicely, one a "fairy tale," and one a very real tale of one man trying to make a difference just by his very presence in American living rooms across the country through the power of television.