"How to Cheat" at the Gremlin Theatre 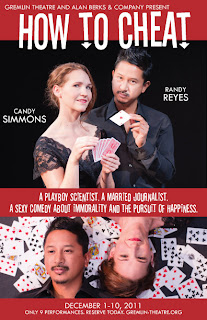 How to Cheat is an interesting little play.  There's a lot going on in the short 75-minute show, some of it weird, some of it funny, some of it intellectual, and all of it entertaining.  The show is playing at the Gremlin Theatre* (which recently produced the thrilling After Miss Julie at the James J. Hill House) and is a joint production with Alan Berks & Company.  The two-person cast includes Randy Reyes, whom I'd watch in pretty much anything because he's always interesting and entertaining, and Candy Simmons, whom I've never seen before but also quite enjoyed.  Alan Berks directs the play and wrote it specifically for Randy; it premiered at the Minnesota Fringe Festival a few years ago and has now been expanded into a full-length play.

How to Cheat is about a man (single) and woman (married) who meet at a fancy party in a huge mansion and steal away together.  They end up in an out-of-the way room furnished with eclectic old pieces and boxes of memories (pretty cool set design by John Bueche, and several of the items are being sold via silent auction).  The room has several levels leading up to a bed.  They both know why they're there but take their time getting there.  Louie and Meri dance and flirt, stumble and run up and down and around the room.  He's a scientist and a bit of a player, she's a journalist who's unhappy in her marriage.  They discuss science and war, they dance, they play a card game that's much more than a card game.  Several different narrative styles are used to tell the story, from normal two-person dialogue, to a dream sequence, to speaking directly to and interacting with the audience.  It's smart and funny, it'll make you think and feel and laugh.  Randy and Candy create two complex and interesting people, and have a believable chemistry.

The play ends with the sounds of explosions coming from outside the room, and the couple decides to face whatever's going on together.  I'm not sure if it really is the end of the world, or if the explosions symbolize the new perspective they have on the world after this connection they've discovered, this shared experience.  The show is only playing for about a week, so act quickly if you're interested.

*I received two complementary tickets to attend the opening night of How to Cheat.