"Cinderella" at the Ordway 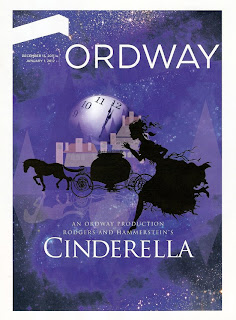 I always like to go to the Ordway's holiday production because it's typically an original production (rather than a touring show) featuring a mostly local cast.  Last year they did the colorful and super fun Joseph, the year before Beauty and the Beast.  This year's selection is the Rodgers and Hammerstein musical Cinderella, originally written for television in 1957 starring the great Julie Andrews.  The Ordway's production is magical and very sweet, and almost makes me believe in fairy tales, almost makes me believe that impossible things really can happen.  It was fun to forget that I'm way too old for fairy tales and immerse myself in the magical world that Cinderella lives in, if only for a little while.

A few of my favorite things:
One gauge of the success of a musical is if I leave the theater singing the songs and feeling like I could dance down the sidewalk back to my car.  By that criteria, the Ordway's Cinderella is a success.  A light and fluffy show, but very well done.