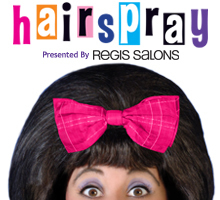 I saw the musical Hairspray at Chanhassen Dinner Theatres yesterday, and I'm still singing and dancing!  I've seen the show several times and it's one of my favorite musical theater soundtracks, so it's no surprise that I loved it.  It's a great cast of Channhassen regulars and newcomers, and a really wonderful production.  I went with my family, a group of 15 people ranging in age from 4 to 66 (including several teenagers), and a good time was had by all.  But it's more than just a good time, it's a great message - togetherness, standing up for what you believe in, and the realization that despite the fact that we might look different, we all just want to dance and have fun and be free to live our lives.  It's easy to forget that segregation wasn't really that long ago in the history of this country.  Today I saw I Wish You Love at Penumbra Theatre (more thoughts on that coming shortly), which gives a much more brutal, realistic view of segregation.  Both shows are about using music and television to enact social change, but that's where the similarities end.  In real life, segregation didn't end cleanly and easily with everyone dancing happily together.  But like Director Michael Brindisi writes in the playbill, Hairspray "is a fairy tale, but it can come true."  Humor and music and dancing is a legitimate way of dealing with an important part of our history.

A few more thoughts:
Hairspray has been extended through May so you have plenty of time to make the trip out to the Southwest suburbs to see this colorful production of a super fun show.  You'll laugh and dance, and maybe even be reminded that like Tracy, sometimes you need to take a stand to make a difference.  It may not end up with everyone happily dancing together, but it might get things moving.