"I Am My Own Wife" at the Jungle Theater 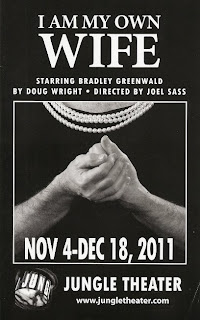 The final play in the Jungle Theater's 2011 season is the Tony and Pulitzer Prize winning play I Am My Own Wife, directed by Joel Sass, who also designed the set.  It's a wonderful end to what has been a very enjoyable year of theater.  The play tells the fascinating true story of Charlotte von Mahlsdorf, German transvestite, antiques collector, museum curator, and gay icon.  Charlotte lived through the Nazi and Communist occupations of Berlin.  She provided a haven for the gay community in East Berlin during a time of persecution, but also worked as an informant for the Stasi (the Communist secret police).  She was truly a singular individual, and the play explores not just her life, but also the playwright Doug Wright's investigation into her life, and his conflicting feelings about her complicated life.

The play is presented as a series of interviews that Doug conducted with Charlotte in her home in Berlin, the Gründerzeit Museum, in the early 1990s.  Charlotte tells the story of her life, and Doug tells the story of writing this play.  Charlotte was born a boy in 1928 but always felt more comfortable as a girl.  She collected furniture and things from abandoned homes, and eventually started the Museum to house them and share them with people.  She moved the Mulack-Ritze Cabaret into her basement when the Communists shut it down.  The Museum was her life, and she received a commendation from the government because of her work.  She moved to Sweden in the 1990s when the news came out about her work with the Stasi (which she somehow justified to Doug), and died in 2002.  The museum is still operating, and I will definitely visit it next time I go to Berlin, which I hope to someday.

The roles of Charlotte, and Doug, and a dozen other characters are played by one man - Bradley Greenwald.  I have been a fan of his for several years and was particularly moved by his portrayal of the Emcee in Cabaret (that other great theater piece about Berlin) earlier this year.  Dressed in a simple black skirt, shirt, kerchief, and a string of pearls (Charlotte was not the stereotypical transvestite with flashy clothes and make-up, she dressed like a grandmother), Bradley transforms himself into all of these diverse characters with just the carriage of his body and his magnificent voice (if you've never heard him sing, which he unfortunately doesn't really do in this play, you're missing out).  When he's Charlotte, he speaks German* effortlessly, mixed with heavily accented English, and often slips back and forth between the two languages almost unconsciously (a mix that my friends and I used to call "Germlish" when I studied abroad in Salzburg many years ago).  When he's Doug or his friend John Marks, he speaks German with an awful American accent, or plain old English.  He's a Nazi, a Stasi, a politician, a TV show host, a reporter; it's truly a beautiful performance.  One that helps you see inside this very human individual who lived an authentic life in the face of much adversity.  (The Iveys agree - Bradley won an Ivey Award for this performance in 2006.  Listen to a great interview with him here.)

I Am My Own Wife is playing now through December 18.  With this wonderful play the Jungle Theater's 21st season comes to a close, and the 22nd season looks to be just as intriguing.

*I should warn you that I love the German language.  I think it's beautiful, maybe because it's the only language other than English that I ever learned and that I can still somewhat decipher.  So it's fun for me when I hear it coming from the stage and feel like I have a little bit more insight into the characters because I can understand it.  Some things are lost in translation.  But don't worry, if you don't speak German you'll still get most of it.  :)