The Civil Wars at the State Theater 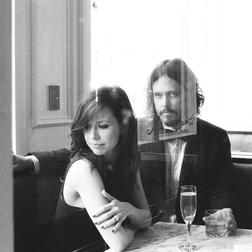 I don't often write about music on this theater-centric blog, but I'm so in love with this duo that I want to tell everyone about them.  The Civil Wars are absolutely magical.  Their music is so hauntingly beautiful that it literally brought tears to my eyes when I saw them at the State Theater in Minneapolis last night.  It'll break your heart, in the best possible way.

I first heard The Civil Wars on Mountain Stage, broadcast on MPR's Radio Heartland (the only radio station I listen to).  The duo is comprised of Joy Williams and John Paul White.  John Paul plays guitar, and Joy plays piano on a few of the songs (her voice itself is an instrument).  No other band members or musicians accompany them, which allows their voices to shine.  They met just three years ago at a songwriting session, and unexpected magic happened when they sang together (you can read more about them and their origins on their website and in this article in Nashville Scene).  She's a California girl, raised on the Beach Boys and the Carpenters and Top 40, and he's a southern boy who grew up listing to country/bluegrass/Americana and metal.  Somehow they meet in the middle and create a style all their own.  She's delightful and adorable and effervescent, a girly girl ("I put on my longest eyelashes for you all tonight!").  He's a little rough around the edges, a little calmer and more grounded (I love a long-haired guitar player).  They have a palpable chemistry together; they're playful and spontaneous and totally in the moment.  They seem to surprise and delight each other as much as they do the audience.

I was only able to record part of one song when an usher stopped me, strictly enforcing the "no video or audio recording rule" (boo).  It's a new song that's not on their fantastic album Baron Hollow, so I'm not sure the name of it (update: it's called "O Henry").  But it'll give you an idea of their playfulness and Joy's expressiveness.

For more of their haunting melodies, here's their most popular song, "Poison and Wine."  (You can watch more official videos on their youtube channel; warning: if you're like me you might get lost there for a while).

One of their encores was a cover of Billie Jean (check out this youtube video from someone who was more discrete with their recording than I - there are some disadvantages to sitting in the front row).  It was the best and most inventive cover of that song I've ever heard (sorry David Cook).  The audience really loved them, and they were obviously touched and a little flabbergasted that so many people showed up to see them.

The Civil Wars were nominated for a CMA (Country Music Award) for best duo this year, and the award ceremony was that same night in Nashville.  Not only did they choose to be in Minneapolis rather than Nashville, but they didn't even mention it at the concert.  I kind of love that.  They don't play Nashville's games.  They don't make music to sell records and get played on country radio and win awards, they make music for the love and beauty of it.  And that appeals to me.  The fact that a duo as talented, original, and authentic as the Civil Wars did not win the award they were nominated for is why I have no interest in country radio, even though I like the genre that is country.  I'll stick to Radio Heartland and my own eclectic collection of music, in which The Civil Wars hold a permanent and prominent place.

P.S. The opening act was a band called Milo Greene, who truly were a band.  Five members, a drummer and four multi-instrumentalists who also shared the lead vocal duties.  Don't ask me to describe their style, but they're pretty cool and original too.