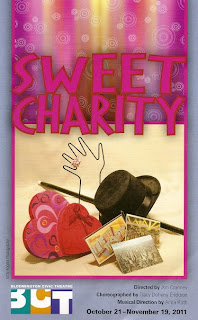 I had never seen Sweet Charity and didn't know much about it, other than it was written and set in the 1960s, and the Christina Applegate 2005 Broadway revival got its start in Minneapolis (which sadly I didn't see).  So I decided to make the trip down to Bloomington (which really isn't as long as I think it is) to see the show.  I was not disappointed.  I discovered I love the show, from the music and choreography to the great 60s look of the set and costumes, and BCT presents a great production of it.

If you're unfamiliar with the show, here's a brief plot summary.  The titular character is a dance hall girl in NYC in the late 1960s.  She believes in love, even though she doesn't have much reason to.  In the beginning of the show her boyfriend steals her purse and pushes her into the lake.  But Charity gets right up again, and makes friends with an international movie star who's in love with someone else.  Determined to improve her life, she meets the sweet awkward Oscar when she decides to take a class at the local community center.  It seems as if she's found what she's been dreaming of - someone to love her.  But it turns out he's not worthy of our sweet Charity, so she keeps looking.

Highlights of the show include:
Sweet Charity is a great show with big fabulous dance numbers as well as more intimate heartfelt moments.  It's only playing for another week, but it's a fun evening of theater if you can make it.