"Julius Caesar" by The Acting Company at the Guthrie 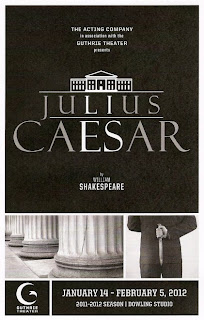 The Acting Company's production of Shakespeare's Julius Caesar* is an intense and beautifully acted drama, even if I didn't quite understand what the war was about or why (spoiler alert) everyone decided to stab themselves at the end.  I wasn't very familiar with the play (other than the well-known quotes "et tu, Brute," "beware the ides of March," and "friends, Romans, countrymen, lend me your ears!"), and it's a little too much war and politics for my taste.  (It brought to mind the magnificently epic HBO drama Rome, about some of the same historical figures, which I also remember loving except for all of the war and political drama.)  That being said, The Acting Company once again brings an energetic,  vibrant interpretation of Shakespeare to the Guthrie as one of the stops on their tour around the country.

Last year The Acting Company performed two Shakespeare plays in repertory - the hilarious slapstick comedy The Comedy of Errors and the classic romantic tragedy Romeo and Juliet.  Four actors from last year's troupe return this year (including Juliet herself, Kaliswa Brewster as Caeser's wife, et al), joined by some familiar faces as well as some new ones.  It's a great ensemble, led by Bjorn DuPaty as the powerful, charismatic, and doomed title character.  But despite the title, the star of the play is Brutus, the conflicted friend of Caesar who loves Rome more than he loves Caesar, and therefore conspires to kill him to save the people of Rome from his tyranny.  William Sturdivant (a graduate of the U of M/Guthrie training program who's appeared several times on the Guthrie stage) makes this conflicted character completely believable, embracing Caesar even as he delivers the final blow, following through with what he started until the situation becomes hopeless.  Zachary Fine gives a wonderful performance as Mark Antony, who grieves for Caesar and promises to avenge his death.  He gets to play a wide range of emotions - devastated, angry, compliant, defiant, persuasive - and reels the audience in every time.  Kathleen Wise, one of only three women in the cast, also gives a fine performance in a short scene as Brutus' wife and as several other characters.

This is a modern-day production of an ancient story.  Contemporary clothing (the men in sharp suits, the women in business attire or beautiful dresses), cell phones, and a block of video screens make the drama feel current.  Walking into the Dowling Studio at the Guthrie, cable news pundits are displayed on the video screens, and the play opens with a demonstration by cheering young people with signs.  It seems like a pretty high tech show to tour with, but it's a nice element that adds to the play.

The moral of the story (if there is one) - violence begets violence.  An arguably noble act leads to more destruction and war, the very thing they were trying to avoid.  That's an idea that is, unfortunately, timeless.  Julius Caesar plays at the Guthrie through the first week of February, and then continues on tour around the country, ending up in New York City in April.

*I received two free tickets to this play as part of "Blogger Night at the Guthrie."


Celebrity Sighting
I spotted the great T. Mychael Rambo (last seen in the brilliantly musical Burial at Thebes) as I was getting on the elevator to head up to the 9th floor studio.  As far as I know he's not currently appearing on stage at the Guthrie; maybe he was there to check out a show!