"Broadway Songbook: Words and Music of Contemporary Broadway" at the Ordway 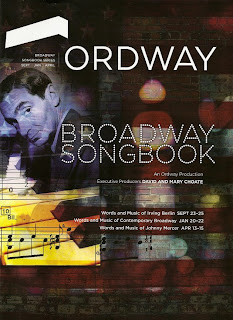 The Ordway is presenting a series of informal cabaret-style concerts this season called Broadway Songbook.  The first one featured the music of Irving Berlin, and was an entertaining and informative look at the history of musical theater.  The second installment, featuring music of "Contemporary Broadway," was the one I was most looking forward to, and I thoroughly enjoyed it.  It was a fairly accurate representation of the state of Broadway today - the good (The Book of Mormon), the bad (Priscilla Queen of the Desert), and the ugly (Spiderman: Turn Off the Dark).  I'm not a big fan of jukebox musicals or adaptations of blockbuster movies; it seems like an easy way for producers to make money without taking any risks.  But that's a lot of what's popular on Broadway these days, so it's only fair that they included it in this show.  Fortunately there were also plenty of original musicals and revivals featured to balance things out.

The host for the series is Ordway Artistic Director James Rocco, and once again he introduced each song with a little background or a funny story about the show or composer.  Accompanied by Raymond Berg on piano, the talented singer/actors included Joel Liestman, Robb McKindles (both of whom also appeared in the Irving Berlin show last fall), Kym Chambers Otto, Allison Tilsen-Kassabian, and Cinderella herself, Jessica Fredrickson.

Some highlights of the show:


It was another great afternoon of exploring the world of musical theater at the Ordway.  The only shows I thought were missing were two of my recent faves - Next to Normal and Spring Awakening (Bloody Bloody Andrew Jackson is probably too much to hope for).  But other than these two absences, it was a truly wonderful selection of the best of Broadway, performed by some fantastically talented local actors, singers, and musicians.  Next up: the music of Johnny Mercer.