"The Comedy of Errors" by The Acting Company at the Guthrie 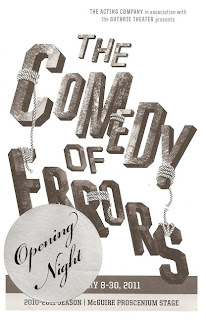 I didn't know Shakespeare wrote slapstick comedies.  But The Comedy of Errors certainly is that, at least as performed by The Acting Company at the Guthrie Theater.  Complete with pratfalls, silly noises, sight gags, bawdy jokes, and plenty of actual slaps, it's way more fun than Shakespeare should be.  The Acting Company is a touring company out of New York City that tours the country with classic theater, "offering opportunities to young performers to play classical roles in major productions."  Many of the cast members are graduates of the U of M/Guthrie training program.  They're spending the month of January at the Guthrie doing The Comedy of Errors and Romeo and Juliet in repertory.  I wasn't planning to see Romeo and Juliet, thinking one show would be enough, but I really enjoyed the bright, young, charismatic cast.  I'm curious to see them in different roles in a more serious play, so I just ordered my ticket for Romeo and Juliet.  They've got an unusual number of weekday matinees on the schedule, which I imagine means a lot of school groups are coming in - always a great thing.  Next destinations on the tour are Brainerd and Madison, followed by a few more Midwest stops before a return to the East Coast.

﻿The Comedy of Errors features typical Shakespearean mistaken identity confusion, times two.  Two sets of twins are separated at birth, one set the "master" and the other set hired (bought?) by their parents to be the "servants."  One of each ends up with each parent, who are separated, never to meet again.  Until 25 years later.  Somehow the twins ended up with the same name, so when Antipholus and Dromio arrive in , they're instantly mistaken for the Antipholus and Dromio who live there, and can't understand why everyone knows them but they don't know anyone.  Even Antipholus' wife is fooled, and is not happy when her husband doesn't want to come home for dinner.  Meanwhile, the "real" Antipholus and Dromio are locked out of their own home (because they're already inside) and are exasperated when people start accusing them of things they haven't done.  At times the wrong servant approaches the wrong master with something entirely other than what he asked for.  Much hijinks and confusion ensue, until after 90 minutes the two pairs meet in a hilarious scene where, after a moment of confusion, all is set right.

The four actors playing the twins are all wonderful.  John Skelley, one of my new faves (The Importance of Being Earnest and The Two Gentleman of Verona at the Guthrie), plays one of the Dromeos along with Stephen Pilkington.  Both are very funny and good at taking a punch.  Our proud and put-upon Antipholuses are Jonathan C. Kaplan and Jason McDowell-Green.  The four have great chemistry with each other, and are obviously having a good time with this show.  An interesting thing is that a few of the actors speak with British accents, while most of them do not.  I assume it was each actors' choice, and somehow it works.  Other highlights in the cast include Sid Solomon as the smarmy jewelry salesman, Whitney Hudson as Atipholus' wife who can't understand why her husband is acting so strangely, and Elizabeth Stahlman as her loyal sister, who can't understand why her brother-in-law is confessing his love for her!

This is my first time seeing The Acting Company, and I like them.  I like what they're doing.  I look forward to Romeo and Juliet in a few weeks, as well as seeing what they'll do next year.