Tonic Sol-Fa at Orchestra Hall and the Paramount Theater 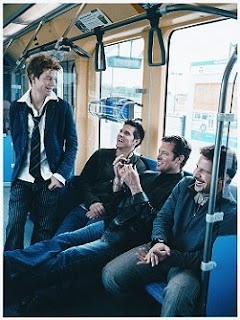 Tonic Sol-Fa is my favorite a capella group.  Actually, they're my only a capella group.﻿  I've been a fan of theirs for almost 15 years, having first heard of them at my and their alma mater, College of St. Benedict/St. John's University.  I first heard them sing at the Minnesota State Fair, where they still appear every year at the bandshell.  I've seen them perform 30+ times over the years, and I never tire of it.  They continually come out with new original songs and new arrangements of old songs, not to mention their silly jokes and other ways to entertain the crowd.  I attended their New Year's Eve concert at the Paramount Theatre in St. Cloud for the 11th straight year; at this point, it wouldn't be New Years without Tonic Sol-Fa!  I also usually attend their holiday show at Orchestra Hall in Minneapolis; even though it's the same show both nights, I just can't resist seeing them in this beautiful venue.
Tonic Sol-Fa consists of four members, each of whom has their distinct role, both vocally and in terms of the chemistry of the group.  Jared, the bass with the super-low voice, provides the steady rythm and dry one-liners, as well as an easy target for the other guys' jokes.  Greg is the goofy one and never fails to make me crack up with whatever silliness he's come up with, especially his annual donning of the Christmas tights.  He's a great beat-boxer and also provides much of the arrangment for the group.  Shaun sings lead most of the time, and along with Greg, is responsbile for most of the entertainment portion of the show.  He has a beautiful voice and is one of those people in whom the music just flows through him in a way he's barely able to contain.  Mark is the straight man in the group that allows the rest of them to be crazy around him.  With his great harmonies and dance skills (he joined Greg in the "Single Ladies" dance this year), he's a consistant and steady presence on the left side of the stage.
Here's a clip of the guys singing "The 12 Days of Christmas" at the Paramount that showcases of each of their skills, as well as their brilliance at coming together and entertaining the crowd.  One of the things I love best about Tonic Sol-Fa is their ability to take a familiar song and turn it on its head to make something new and fresh.  I usually end up liking the TSF version better than the original.
I'm listening to their new CD "Something Beautiful" as I write this; it's a collection of their best ballads from the past 5-10 years and includes the beautiful new song, "We All Need Saving."  Here's a clip of it from Orchestra Hall.  Take note of my favorite moment, when they drop their mics near the end of the song and their unamplified voices fill the space in Orchestra Hall.
The bottom line and the reason I keep returning to show after show, is that in addition to great music, the members of Tonic Sol-Fa are obviously having so much fun performing and entertaining the audience, that it's impossible for the audience not to have fun too.  Whether you're young, old, or anywhere in between, you're sure to have a good time with these guys.  I know I always do!
One more clip: a cover of Michael Buble's "I Just Haven't Met You Yet," with crowd participation (I dare you not to sing along!).