"Long Day's Journey Into Night" by The Gonzo Group Theatre at the James J. Hill House 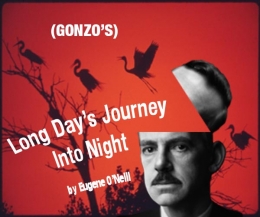 I saw Eugene O'Neill's autobiographical masterpiece Long Day's Journey Into Night for the first time just a few weeks ago, at the Guthrie Theater. It's a wonderful production, as to be expected from the Guthrie. But what fascinated me most about this play is that fact that it is autobiographical, and is so painfully true that O'Neill did not allow it to be published or produced until after his death. The Gonzo Group Theatre also seems to be fascinated with this idea; they have created a production that is as much about the playwright as it is about the play. Gone is the character of the housekeeper (not a big loss, mother Mary's conversation with her turns into a monologue), while a new character is added - O'Neill's wife Carlotta. She wanders around and through the action of the play, collecting the papers that are strewn all over the set (more on the magnificent "set" in a moment), assisting her husband as he tries to make peace with his family and his past through the process of writing (as explained in the note by director Jennifer Harrington). When I first saw the play, I wanted some sort of resolution at the end. But there is none, only hopelessness, and a bit of relief for the audience that they can leave the dark place they have entered into and go back to their lives. But as this version of the play makes clear, the only resolution is in O'Neill's mind, as he was hopefully able to release the demons of his past by writing about them. And leaving us with this poetic, depressing, moving, gut-wrenching, masterful play.

The location of this unique production is the main hall of the James J. Hill House in St. Paul. If you've never been there, it's worth a visit to see this grand home of one of Minnesota's most wealthy historical families. The house also hosts special events, concerts, and occasionally, works of theater. I saw Gremlin Theater's After Miss Julie in the basement kitchen a few years ago, which I found to be an entirely appropriate and authentic setting for the play. This magnificent mansion is not exactly a summer home on the sea, but the period is right (Long Day's Journey takes place in 1912, at which time the Hill family was still living in the house), as is the weighty atmosphere of history and grandeur. And with just 25 seats, it's an intimate experience; you're practically sitting at the table with the Tyrone family, sharing a drink with them. They make great use of the space - the entire long hallway, the out of sight dining room, and the grand staircase, going in and out of doors and looking out the windows at the foggy sea. The house is open before the show and during intermissions, and guests are free to roam around and soak in the atmosphere.

Another unique feature of this production is that it's a true family affair. Real-life married couple Claudia Wilkins and Richard Ooms play Mary and James Tyrone, and their son Michael Ooms is the elder son Jamie. It's kind of trippy to watch a real-life family acting out the life of another real-life family that lived 100 years ago, and they all give great performances. Claudia and Richard once again play a believable married couple (they also played a married couple in The Birthday Party at the Jungle last year), as Mary grows more and more unhinged due to her morphine addiction, and James, himself an alcoholic, gradually accepts their fate. Michael shines in the third act when Jamie is seriously drunk, funny and heart-breaking and a little scary. Luke Weber plays younger son Edmund (aka Eugene O'Neill) and fits in well with the family. Edmund is quiet and sickly, and comes alive when reciting his beloved poetry. It's a tragic story, except that the ever-present Carlotta (Evelyn Digirolamo) is able to successfully gather up the pieces of her husband's life and put them in some kind of order.

If you're reading this on Saturday, you might still be able to catch this unique theatrical experience - call or email now to see if there are any seats left for tonight's final performance (the price couldn't be better - free, with a suggested donation if you like what you see). I love seeing theater in non-traditional spaces, and this is an incredible space, a classic American play, and a really great production. I think this is the first time I've seen two different productions of the same piece in one year, much less in the same month. At first I was reluctant, not wanting to compare the two, but they turned out to be really nice companion pieces that gave me further insight into this play and the mind of the playwright.