"Long Day's Journey Into Night" at the Guthrie Theater 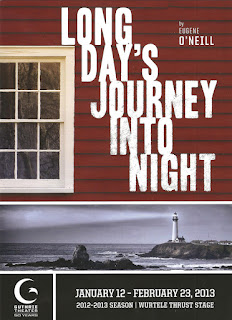 Long Day's Journey Into Night is the autobiographical masterpiece of American playwright Eugene O'Neill. The son of an actor, he was born in a hotel at what is now Times Square - you can't get much more ingrained in the history of American theater than that. This piece was so personal to him that he left instructions that it not be published until 25 years after his death. His life reads like a tragedy, full of drug addiction and mental illness, so it's no wonder that this most truthful of all his plays is a tragic family story. Set in 1912 at the family's summer home on the sea, the mother is a morphine addict (as was O'Neill's mother), the father and two sons alcoholics (O'Neill's older brother died of complications of alcoholism at the age of 45). The action of the play takes place all in one day as it journeys into night (such a beautiful and poetic turn of phrase). There is love in this family, but also anger, frustration, and desperation. With the Guthrie's usual top-notch production values and stellar (and primarily local) cast, it's a heavy, intense, thought-provoking, and deeply rewarding look at an American classic.

On the night I attended the play, shortly before the lights came up in that lifelike and lived-in seaside home built on the thrust stage, there was an announcement that the role of family patriarch James Tyrone was to be played by Raye Birk, rather than James' usual portrayer, Peter Michael Goetz.* A slight murmur of disappointment rippled through the audience, but 30 seconds after Raye Birk stepped on stage I forgot that anybody other than him was supposed to be playing this role. I've been a fan of Raye's for years, but I'm even more in awe of his talent after watching him step so smoothly into a role that he'll probably only play a handful of times in the six-week run of the show. He and the rest of the cast completely embody these characters both physically and emotionally, and make your heart break at the tragic situation they've created for themselves. The beginning of the play is almost hopeful. Mother Mary (a fragile and fluttery Helen Carey) has just returned from her latest attempt to get sober and seems to be doing well, despite the men in her family watching and reading into her every move and word (it's almost as if their suspicion of a relapse is a self-fulfilling prophesy; they expect her to return to her addict ways and so she does). Youngest son Edmund (a stand-in for the playwright) is sick with consumption (played by John Skelley, who, thanks to his constant cough and the make-up and wardrobe, looks and sounds convincingly sickly, sallow, hollow-eyed, and thin in an oversized sweater). Things go
downhill as the day
progresses and pre-lunch drinks turn into pre-dinner drinks turn into an after-dinner binge (as the elder son Jamie, John Catron is such an excellent drunk that I was afraid he was going to fall over!). Heartfelt discussions and confessions (in vino veritas, as Jamie says) are shared between various pairs of characters, but the day ends with the family stuck in the tragedy of self-destruction.

If you're a fan of the American theater, head to the Guthrie between now and February 23 to experience this classic.


*Update: Raye Birk is permanently taking over the role of James Tyrone from Peter Michael Goetz, who has returned to his California home to take care of a personal matter. I'm sorry to see Peter go and I wish him well, but rest assured that the role is in good hands.