"Doubt" by Minnesota Opera at the Ordway Center 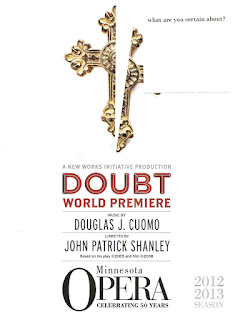 I often say that opera is not my thing, but I've only attended one opera in my life before last night (La Boheme of course, because of its connection to my favorite musical RENT), so that's not a very informed opinion. But when I heard that Minnesota Opera was doing a world premiere of Doubt (the brilliant 2005 play that was made into a movie in 2008) at the Ordway, I was intrigued. Lucky for me, my fellow blogger Bartley invited me to go along with her when she attended as a writer for Minnesota Playlist. I'm not sure I have the time or the inclination to become a regular opera goer, but I thoroughly enjoyed the experience of witnessing this beautiful new interpretation of a complicated and fascinating piece of theater.

I saw Ten Thousand Things' version of Doubt, A Parable (its fascinating and revealing full title) two years ago, and it was one of my favorite shows of the year (Ivey's, too). This four-person 75-minute play is short, intense, and though-provoking. Set in 1964, a nun and principal of a Catholic school accuses a priest of impropriety towards a student. But that's not really what the play is about; this story is used as a parable to explore the ideas of doubt vs. certainty. It's not about whether or not the priest is guilty, it's about what the presumption of guilt or innocence does to those around him. How do we ever know the truth about someone? Can we be certain about anything, or do we just have to resign ourselves to make the best choices we can on the information we're given, and live with the consequences? The piece asks, "What are you certain about?" (As does the sticky note on the front of the opera program.) John Patrick Stanley wrote the play, the screenplay for the movie adaptation, and the libretto for this new opera. The one-act four-person play has been expanded into a full, luscious orchestra with a huge cast on a big stage with stunning sets, and a large beautiful orchestra backing it up. I don't know much about opera so I can't speak to where this lies in the context of the opera world, but as a new interpretation of a piece of theater, it's a success. 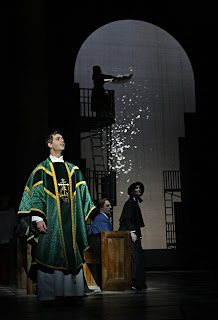 The star of the show (and really the pivotal character) is Christine Brewer as the accuser Sister Aloysius. She has a commanding stage presence and an amazingly expressive voice; you can really hear Sister Aloysius' doubt beneath her claims of certainty. Also good is Matthew Worth* as the accused Father Flynn, charming and seductive, but giving one a slight feeling that something might be off. As in the play and movie, the role of Mrs. Miller, mother of the alleged victim, is a showstopper. She doesn't care what Father Flynn's interest in her son is, as long as he's seemingly kind and helpful to him, which he sorely needs in his life right now. Her only scene is a memorable one, as the orchestra pauses for her to plead for her son with a solitary voice. But my favorite scenes were those between Father Flynn and Sister Aloysius. Theirs is an intense power struggle, and tension in the music builds as the tension in the scene builds. They are surrounded by a huge cast, including a bunch of kids running around and being kids (in those familiar Catholic school uniforms). The sets are beautiful and elegant. The church scenes are so realistic (and familiar to a former Catholic), that I had to stop myself from making the sign of the cross. Huge columns adorn the stage, with pieces moving smoothly in and out as if by magic. In one scene, Father Flynn compares gossip to opening a feather pillow on a rooftop, and the illustration of the story in silhouette at the back of the stage is a thing of beauty.

So that's my experience at the opera, a truly fascinating and entertaining one at that. I think it helped that it was based on a piece of theater I'm familiar with. I won't be rushing to see an Italian opera, but I will keep my eye out for other pieces that may interest me. If you're a theater fan looking to dip your toe into the world of opera, Minnesota Opera's world premiere production of Doubt is an excellent choice! 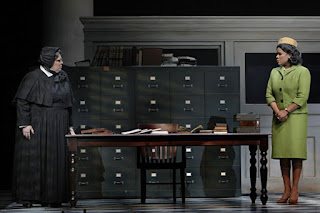 *Just before I saw the show I watched the season finale of American Horror Story, in which Joseph Feinnes played a priest who might also have been guilty of some wrongdoing. From my seat in the first row of the mezzanine, Michael Worth looked enough like him that the whole night I felt like Joseph Feinnes was singing to me, not a bad thing!