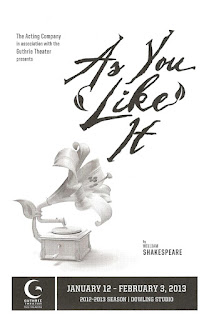 The Acting Company has been touring the country for 40 years, bringing Shakespeare and other classic works of theater to cities from Decorah Iowa to NYC. The Acting Company has close ties to the Guthrie Theater, where it stops every January, and features many U of M/Guthrie BFA graduates. This year they're presenting As You Like It (which I saw just last year in a delightful interpretation by Ten Thousand Things). In case you get Shakespeare's comedies confused like I do, with their similar plots of banishment, disguises, and mistaken identities, let me remind you that As You Like It is the one where Rosalind is the daughter of a banished Duke, who escapes into the forest disguised as a man, where she convinces young Orlando to woo her as if she were Rosalind. And everyone lives happily ever after. The talented young cast and the delightful staging bring this amusing story to life.

I think it's safe to say that after 40 years, with such alumni as Rainn Wilson and Kevin Kline, not to mention chairperson of the advisory board Angela Landsbury, The Acting Company is an institution of the American theater. They're at the Guthrie through February 3, and then will continue to tour the country with As You Like It and Of Mice and Men (which I wish they were doing here as well) through spring. This is my third year seeing them (see last year's Julius Caesar, and 2011's Romeo and Juliet and A Comedy of Errors), and they never disappoint.  Check them out at the Guthrie, and watch this video about the 40th anniversary of The Acting Company: