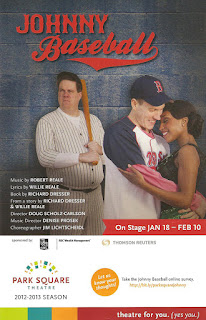 New original musical theater is my favorite thing in the world (and something that's in short supply in these days of jukebox musicals and movie adaptations). Baseball is another one of my favorite things, so combining these two things makes me a happy baseball/theater fan. Johnny Baseball is a new musical by brothers Robert and Willie Reale (music and lyrics, respectively, who were in attendance opening night) and Richard Dresser (book). It premiered at American Repertory Theatre in Boston in 2010 and has gone through a few workshops before it's current incarnation at Park Square Theatre. While it's not the perfect musical (yet), it has some really great songs and scenes, and has the potential to be a great and successful musical. I'm not certain it could every play on Broadway; this love song to the Boston Red Sox might not be well received in Yankee territory. (On the other hand, we all know Broadway is for tourists, so it might be OK!) But the current version is highly enjoyable for baseball and musical theater fans alike, with a fantastic cast and clever and interesting staging, direction, and choreography.

Johnny Baseball mixes fact and fiction. The fact is that the Red Sox went 86 years without a World Series win. While the real reasons for that are complicated and varied (and in my opinion can mostly be attributed to the fact that baseball is a funny game, and sometimes things just don't go your way), one popular theory is that the Red Sox were cursed because they sold their star player, Babe Ruth, to the Yankees in 1920, beginning a streak of Yankee dominance in World Series (that I as a Twins fan find frustrating and unfair, but don't get me started about the Damn Yankees!). Johnny Baseball proposes an alternate theory to the so-called "Curse of the Bambino." While this theory is just as preposterous, it works well as the conceit of the show (except for the fact that this curse happened in 1948, which doesn't explain the first 30 years). We begin with modern-day Red Sox fans agonizing over a game (specifically, game 4 of the 2004 ALCS), when an old man in a Yankees hat begins to tell a story. We then flash back to the 1918 Red Sox season, when a fictional rookie pitcher named Johnny O'Brien joins real life star Babe Ruth. Johnny meets and falls in love with "colored girl" singer Daisy, and things don't go well for them, as to be expected in 1918. We continue on through history to Babe's death in 1948 and later, as Johnny and Daisy (and, presumably, the entire Red Sox nation) experience the consequences of their relationship. It's really a tragic story of love lost and talent wasted, but the tone of the show is mostly hopeful and happy.

The show is incredibly well-cast, down to every last member of the ensemble (way too many to mention here, but a few standouts include Sarah Gibson, who looks and sounds so perfect in these period roles, like the ones she's played with Skylark Opera, and Max Wojtanowicz, always charismatic and a joy to watch). In fact, I found the ensemble numbers to be the strongest moments in the show - really fun and clever songs celebrating the joy and heartache of being a baseball fan. The leads are up to the task as well. I've seen Timotha Lanae playing supporting characters in various things around town, so it's nice to see her in the spotlight here as the strong-willed blues singer Daisy, and she takes to it very well. Josh Campbell is sweet and sincere as the naive young rookie who becomes known as Johnny Baseball, and nicely transforms into a more jaded and lived-in version of the character in the second act, 30 years later. Timotha and Josh's voices blend beautifully on such numbers as the sweet "I Thought About You." Zach Curtis is a scene stealer as the confident and lascivious Babe, and again later as powerful and eccentric Red Sox owner Yawkey. Also of note is Rudolph Searles III, who has a lovely voice as Tim, a pivotal character in the "curse."

In addition to the cast, the staging, direction, and choreography are all also top-notch. The set (by the always excellent set designer Michael Hoover) consists of red wooden wheeled platforms of varying heights that are moved around to represent bleachers, a bed, or a pitcher's mound. Big screens adorn the stage that display historical photos or images that serve as set backdrops. The actors move around this world with ease, and the choreography is so ingrained into the story that I'm not sure where the direction (by Doug Scholz-Carlson) ends and the choreography (by Jim Lichtsheidl) begins. This is not the typical musical theater choreography, with bold and precise big dance numbers, but is something more loose and organic, whether it's drunken men swaying and singing (the hilariously entertaining "Brotherhood of Bastards") or fans suffering and celebrating through a ball game. I didn't know Jim was a choreographer, but he's long been one of my favorite actors because of the specific and thoughtful physicality he brings to every one of his performances, so it really shouldn't be surprising that he's transferred that physical way of inhabiting a character to this cast. Along with the choreography, the representation of baseball itself is interesting and innovative. The pitcher throws into the audience, while the catcher receives the pitch on the other side of the stage from the audience, just one of several delightful representations of the movement of the ball. And the period costumes (MaryBeth Gagner) are gorgeous.

Everything about the baseball part of this show is fantastic and spot-on, from the opening number "Eight-Six Years" (we're going on 22 years without a championship here in Minnesota so I feel the pain!), to the love/hate relationship with a handsome opposing player in "Not Rivera," to the desperate pleas of baseball fans in "One More Run" (both feelings to which I can relate), to the beautiful and poetic ode to the magic of baseball in Johnny's song "All I Have to Do." "See You in the Big Leagues" is a fun and catchy song, and Daisy's nightclub number "Color Me Blue" is wonderfully bluesy. However, the non-baseball parts of the show could perhaps benefit from a little more development. The lackluster love song "Mr. Moon" is a little too "Somewhere Out There" (Timotha and Josh deserve a better song), and while the staging of the love song "God Wouldn't Mind" is cute, the words are less cute than creepy. I also didn't love the penultimate number "Errors" (Sondheim did it better in "No One Is Alone"/"Children Will Listen"). But with a few more tweaks the creators could have a really successful show on their hands, wherever they take it next. I'm thrilled to have gotten the chance to experience this new work.

Most of all, this show speaks directly to my baseball-loving heart and makes me anxious for the end of the long off-season. Only 29 days until the first Twins Spring Training game! Until then, head to downtown St. Paul between now and Feb. 10 to experience the joy, frustration, and community that comes with the love of the game. (Or head over to the good old HHH Metrodome this weekend for TwinsFest 2013 to meet some of the players before they head down to Fort Myers, as well as great players from Twins baseball history, like Tony O, Rod Carew, and one of my personal faves from the glory days of the late 80s, Frankie V). Let's play ball!