"The Ultimate Pajama Party" at the Lab Theater 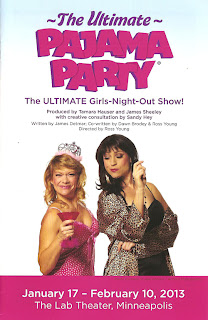 I tend to be a little leery of things referred to as "for girls only!" I'm afraid that it'll be chock full of gender stereotypes that will offend my feminist sensibilities more than entertain. But when I received an invitation to the opening night of The Ultimate Pajama Party at the Lab Theater, I couldn't resist the idea of going out to the theater in my comfiest and cutest pajamas (I have a weakness for pajamas, and can never walk through the Target pajama section without throwing something into my cart). The Ultimate Pajama Party is more party than theater, and since I'm a theater geek who enjoys theater more than parties, it's not really my thing. But everyone seemed to be having a great time, and I can see that it could be a really fun thing for a group of girlfriends who like this type of thing. The gorgeous space at the Lab Theater is decked out to full effect and everyone involved has worked really hard to create a fun and welcoming space for this experience.

As expected, this "girls night out" event does play on every stereotype of What Women Like, from the Kardashians and Fifty Shade of Grey (no, thank you) to shopping and jewelry (yes, please). Even the cast of characters assembled fit into stereotypes - the frazzled mom, the single girl, the gay best friend. The evening is set up as a party for Lisa, who is late in arriving to the party (allowing us party-goers time to visit the tiki bar and enjoy the free snacks). Lisa has invited her friends to celebrate, and the evening continues with a few skits and musical numbers interspersed with party games. I wish that the scripted play parts were more developed. They've assembled a fantastic cast of local actors whose talents I would like to see more of. What's there is good (written by James Detmar, who brilliantly played many roles in Spring Awakening last year), there's just not enough of it. The website says "After a bad breakup with Steve, a dead-end job and years spent not pursuing her dreams, Lisa is ready to celebrate new beginnings," but I didn't really get that from the show. I would prefer more scripted parts and less interactive games (diet bingo, walk like a Kardashian). But again, I'm a theater geek so maybe that's just me.

On the plus side is that fantastic cast of local actors I mentioned:
Many of them go by their real names in the show, and seem to be sharing some real stories about their lives, so I'm not really sure where the actor ends and the character begins. They all meander through the audience during the show, chatting with guests, and are all very fun and open, creating that party atmosphere. The evening concludes with a performance by Lisa's favorite local band (and actual local band), Belladiva. They sing a collection of current pop hits (which I like to call Glee songs) as well as classic female power pop anthems like "I Will Survive" and "It's Raining Men." This loosely theatrical interactive event turns into a dance party.

I love the Lab Theater - it's like a big, beautiful blank slate. Joshua Barnd has transformed it into an elegant space, with comfy white couches and chairs, black tables, zebra print floor, gorgeous drapery, and a fun setup for photo shoots (if that's your thing). It's just an all around lovely space to be in. There are also party favors and t-shirts to be had, and free food - always a plus at a party!

The Ultimate Pajama Party is super cheesy, both literally (snacks!) and figuratively. They're definitely targeting a specific market and might become a huge success. Personally, I prefer more traditional theater (did I mention I'm a geek who would a million times rather go to the theater than a party?), but if you're looking for a fun and silly night out with your girlfriends, you might want to give this one a try. The party continues through February 10, and don't forget to wear you favorite pajamas! (Half price tickets available for select dates at Goldstar.com.)