"A Don't Hug Me Christmas Carol" at New Century Theatre 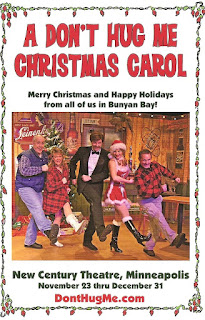 I purchased a three-show package at New Century Theatre (the newest of the Hennepin Theaters), mostly because I really wanted to see 2 Sugars, Room for Cream, and the other two shows in the package looked interesting: Deer Camp The Musical (starring Newhart's brothers Darryl) and A Don't Hug Me Christmas Carol. I found 2 Sugars, Room for Cream to be a delightfully original sketch comedy, and the other two... well, let's just say they didn't quite live up to what I believe musical theater can do (see this and this). That being said, I chuckled more than once, and the audience seemed to be having a great time. A Don't Hug Me Christmas Carol is very similar in structure and feel to Deer Camp The Musical, but since I can relate to the traditional Minnesota Christmas more than I can relate to a weekend getaway based on killing animals, I enjoyed this one a little more. It's a very loose retelling of the Dickens classic A Christmas Carol, set in small town Minnesota. Local bar owner Gunnar falls in the frozen lake and is in a coma, whereupon he's visited by his romantic and musical rival, Sven Jorgenson, showing him his past, present, and future. And like in the classic story, this Scrooge learns to be a little more kind and grateful, and yes, even allow his wife to hug him every once in a while.

Highlights of the show, such as they were, include:

I've heard about these Don't Hug Me musicals (there are several in the series) and often wondered about them. Now I know they're not really my kind of musical. But they serve a purpose I suppose, and less adventurous theater-goers might enjoy them. A Don't Hug Me Christmas Carol is playing now through January 6. (But in the genre of Minnesota-themed holiday shows, I highly recommend Yellow Tree Theatre's Miracle on Christmas Lake II.)