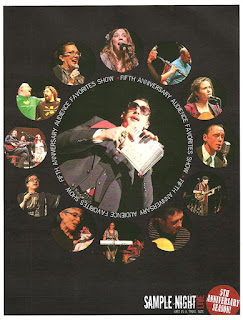 I can't believe it's been two years since I've been to Sample Night Live, the variety show held the first Wednesday of every month at the History Theatre that gives audiences a chance to sample local art (performance and visual). I attended the audience favorites show in December of 2010 and have always meant to go back, but something always comes up. So when my friend The Playbill Collector told me she was able to get some blogger tickets to this year's audience favorites show, I was happy to go along. And even happier to see that the host would once again be Loungeasaurus Rex (alter ego of the multi-talented Tom Reed). He never fails to entertain with his trademark mix of comedy, ad lib, crowd interaction, and cheesy (but good) lounge singing, all while clutching his notes in his multi-ringed hands. When an audience member told Loungeasaurus that he used to build semi-conductors, he made up a silly and clever song on the spot about semi-conductors. But not the usual definition, rather it became a song about a conductor who was not yet a full conductor. Hilarious.

But enough about the host. On to the performances. At each month's show, the audience picks their favorite act among the musicians, actors, poets, puppeteers, etc. Those winners are invited back in December, where the year's favorite is selected. The candidates include (click on each artist's name to find out more about them):

I very much enjoyed my second time at Sample Night Live, and I vow not to let another two years go by before going back. Yes, some acts were better than others, but that's the beautiful thing about Sample Night - if there's an artist you don't like, take heart, it'll be over in seven minutes, and then there will be another artist onstage, and you just might discover a new favorite. In addition to the diverse talent onstage, visual artists also present their work for sale in the lobby. And did I mention the prizes? While I didn't win, someone in my group did, as more than a dozen prizes were given out in the door raffle.

A night like this makes me appreciate artists and the amazing creativity that they display. What makes someone think - "let's pair an oboe with an upright bass," or, "I know, I'll play the guitar, two drums, cymbals, tambourine, and a harmonica all at the same time, and sound really awesome doing it," or, "I'm going give voice to a lumpy dog puppet that's as interested in smelling people's butts as real dogs are," or, "let's attempt so speak in unison even though I have no idea what you're going to say," or, "I can slick back my hair, put on a cheesy 70s suit, make up a song on the spot, and make people laugh."  Artists boggle my mind, and make me happy to live in the same world they do.