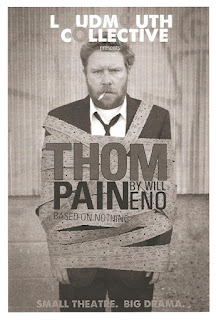 We create community.
We have fun.
We're small.
We want to share a drink.
We get it.
We love language.
We don't waste your time.
We are sick of apathy.
We tell stories.

This is how the new theater company Loudmouth Collective describes themselves. I think all of those things are fantastic, as are all of their shows that I've seen. OK technically Thom Pain (based on nothing) is the first Loudmouth Collective production I've seen, but their first show was a remount of one of my favorite shows of 2012, The Peanut Butter Factory's Gruesome Playground Injuries, and Artistic Director Natalie Novacek (who directs this piece) also directed one of my favorite Fringe Fest shows of last year, Joe Dowling's William Shakespeare's Romeo and Juliet on the Moon, Featuring Kate Mulgrew as Lady Capulet. So I feel like I've got the gist of what they're all about. And that is: interesting, intelligent, funny, a little bizarre, thought-provoking, unique, meaningful theater. It's good stuff, friends, check it out.

I can't really tell you what this play is about. As the title says, it's based on nothing. In this one-man show, a character called Thom Pain tells stories directly to the audience for 70 minutes straight. Stories about a sad little boy, a dog, bees, a love gone wrong. Stories that draw you in, painting pictures with words, and then snap you back to reality. It's sort of faux-interactive; Thom talks to people in the crowd, but it's all part of the show. It's always a little scary when the house lights go up, but don't be afraid, you're among friends. I just hope you're paying attention. 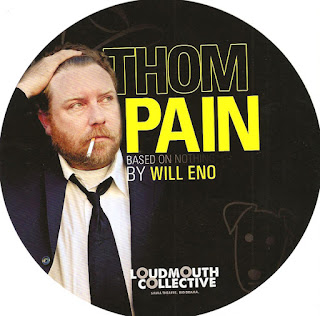 As Thom Pain, Sam Landman gives a terrific performance, the kind of performance that makes you forget that this is an actor playing a part, and begin to think that he's really just this crazy/profound guy going on a 70-minute existential rant. It's a pretty remarkable feat just to perform this piece that's so dense with words, but Sam also manages to convey a range of emotions - pain, anger, confusion, loss, frustration, longing. It's intense and captivating, and quite fascinating to watch.


This is my first time attending a theater production at Open Eye Figure Theatre, although I was there once for a concert. It's a great little space. Small and intimate, with a brick arch over the stage, it's a nice place to watch theater. The stage is completely bare for this show, except for a dictionary on a stand. The lighting (by Stephanie Richards) is the only thing that creates the mood; Thom is almost in conversation with the lights.

I'm really at a loss for what else to say about this piece, partly because I'm still processing it, and party because I don't want to spoil any of the delightfully perplexing surprises in the show if you go see it. And if you're looking for something unique and different, you definitely should go see it. Thom Pain (based on nothing) plays for one more weekend at the Open Eye Figure Theatre; reserve your tickets here. And remember - pay attention!