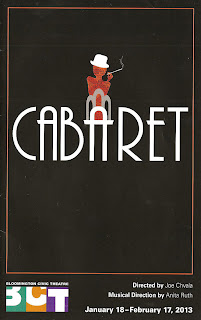 This is the third local production I've seen of Cabaret in the last two years (the others were by Frank Theatre and Lyric Arts), and I couldn't be happier about the repetition. I love Cabaret because it's wildly entertaining and fun, featuring a fabulous Kander and Ebb score, but has a dark undercurrent of the impending doom that is the Nazi party coming to power in 1930s Germany. It's a fun musical that also has depth. Cabaret is all about living this crazy life to the fullest, because it could be gone tomorrow. Director and choreographer Joe Chvala writes in the program, "our production celebrates the resistance to tyranny and the desire to be open to life's strange, wonderful and all-too-quickly-gone beauty." In this colorful production with an expansive and energetic cast, a full musical sound, several big dance numbers, and an incredible set, that objective is decidedly accomplished.

A few things noteworthy things about the show:

At the beginning of Cabaret, the Emcee invites the audience to "leave your troubles outside" and enter the world of the Kit Kat Klub for a few hours. It's an excellent suggestion and a wonderful place to do just that; in fact, it may even get you thinking about troubles much larger than your own. (Playing now through February 17.) 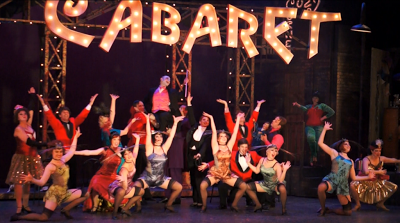