"The Book of Mormon" at the Orpheum Theatre 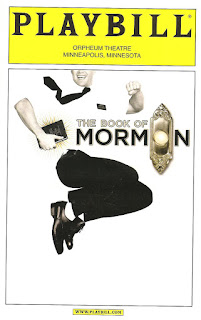 We are still Latter Day Saints, all of us
Even if we change some things
Or we break the rules
Or we have complete doubt that God exists
We can still all work together to make this our paradise planet.

This pretty much sums up my fundamental spiritual belief. It's quite unexpected to find such profundity in a big old-fashioned Broadway musical that contains the foulest language I've ever heard coming from the stage. Creators Trey Parker and Matt Stone (South Park) and Robert Lopez (Avenue Q) brilliantly walk that line between hilarious vulgarity and a beautifully sweet heart, and have created that truly rare piece of entertainment that lives up to all of the hype surrounding it. The Book of Mormon is perhaps the most joyful musical I've ever seen, full of the joy of life, friendship, and community.

The heroes of our story are a couple of young Mormon men who are paired together on a mission to Uganda to convert the native people to the Mormon religion. The two have opposite journeys in the story. Elder Price is the overachiever who has the perfect life planned out for himself, and has to learn some painful lessons (literally) that life is not quite that easy. Elder Cunningham is the schlubby compulsive liar who's never done anything right, until his well-intentioned lying saves the day. The Ugandans resist every attempt at conversion because the stories about an American prophet half a world away have nothing to do with the very real problems of illness and violence that they face on a daily basis. It's only when Elder Cunningham is able to make the stories more relatable that they begin to find comfort in The Book.

Despite my disappointment that my favorite Broadway actor Gavin Creel recently left the role of Elder Price in the First US National Tour to create the role in the London version of the show, I have to admit that this is an all-around fantastic cast. I saw the original cast on Broadway and this one is every bit as good. The ensemble has such sharp precision in the execution of this wonderful and traditionally Broadway choreography and the decidedly non-traditional lyrics. There are moments in the opening number when they sound like a heavenly choir. Mark Evans is extremely charismatic and enthusiastic as Elder Price, with a voice to match. Before reading his bio at intermission and discovering that he's a Welsh actor who's worked mostly in the UK, I had no clue that he was anything but All-American; he has no trace of an accent. Christopher John O'Neill makes the role of Elder Cunningham his own; no one can be Josh Gad so he wisely doesn't even try. He doesn't have a strong voice, but that works for the character, and he more than makes up for it with his complete embodiment of that sweet, innocent, well-meaning buffoonery. Samantha Marie Ware is a star as Nabulungi, with a beautiful singing voice and appealing stage presence. The duet between Elder Cunningham and Nabulungi, "Baptize Me," is about the sweetest unconventional love song ever seen onstage. Other favorite moments include the exuberant "Two by Two" as the boys are sent on their missions, Elder Price's fierce declaration of unwavering faith in "I Believe," and the finale, "Tomorrow is a Latter Day," in which our characters joyfully exclaim that today is what matters, not some future other world.

The Book of Mormon is an example of everything musical theater can and should be. Using this traditional American art form in a new and interesting way, telling stories, sharing joy, poking fun at established institutions (not just the Mormon religion, but religion in general), singing clever and musically entertaining songs, and just plain old entertaining the audience. It even includes a few nods to classic musicals - several references to The Lion King, and a line that's similar to a song from The Sound of Music (although one written for the movie, not the stage version). If you want to experience this new classic of musical theater, check out the Hennepin Theatre Trust's website for information on ticket availability and the daily lottery (all shows in the two-week run have been virtually sold out for months). Unless you have no heart (or can't get past the language), you will leave the theater feeling a lot lighter and happier than when you entered it.