"The Birthday Party" at the Jungle Theater 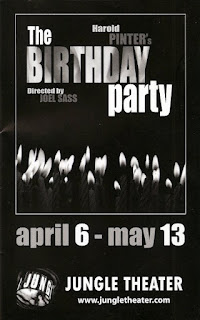 I don't get Harold Pinter.  This is the second of his plays I've seen in the last year or so, and although the plots were very different, both left me with a feeling of "what just happened" as I left the theater.  Which I guess is kind of the point with the acclaimed English playwright, whose "style mixed domestic turmoil, evasive dialogue and not-so-heroic characters with experimental storytelling styles and an atmosphere of comic menace" (according to a note in the playbill).  It's more about the language and the fascinating characters than the plot, which is intentionally vague.  In The Birthday Party, two mysterious men show up at a boarding house by the English sea, inquiring about its sole resident, for some unexplained but clearly malevolent purpose.  It's bizarre and inscrutable, but the cast assembled by the Jungle Theater is fantastic in creating these crazy characters that are somehow still sympathetic.  I can recognize that it's a great production of a classic play, even if I don't really get it.  And it's still a lot of fun, albeit perplexing fun.

Real life husband and wife Richard Ooms and Claudia Wilkins portray the married proprietors of this shabby boarding house, and not surprisingly, they're quite believable as an old married couple.  Stephen Cartmell is particularly effective as the depressed, haggard, mysterious resident Stanley.  He's hiding out in this little seaside town, from what we never learn.  But it has turned him into a skittish, angry, frightful man.  Stephen dives into the role whole-heartedly, and somehow engenders sympathy for this mess of a man who just wants to be left alone.

Mr. Goldberg, one of the two nefarious men who show up to claim Stanley, is played by Tony Papenfuss, aka "my brother Daryl" from Newhart (he's returned home from L.A. to continue his career on Twin Cities stages, how did I not know that?).  Mr. Goldberg is deliciously evil and up to no good, as you can tell from his slicked back hair and mustache.  His companion, Mr. McCann (Martin Ruben), is the muscle of the organization.  The sensitive Irishman is nervous until they actually start doing the job.  The two are a great comedy team with rapid-fire dialogue, especially as they're questioning Stanley.  Not surprising that the interrogation ends in screaming!  Rounding out the cast is Katie Guentzel as Lulu, who seems much too pretty and normal to be hanging out with this crowd.  But she obviously has a story of her own, which we never really learn, that attracts her to these misfits.

The dingy and unkempt boarding house comes to life in the precise and detailed little diorama that is the stage at the Jungle Theater.  As is common at the Jungle, the director is also the set designer, in this case Joel Sass, which always seems to create a cohesive vision for the story.  It's so lifelike, with dust and dirt on the surfaces, that I wouldn't want to set foot in that room!  But I did enjoy peering into it for two and a half bewildering, engrossing, entertaining hours.