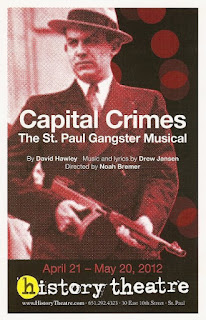 I love HBO's Boardwalk Empire, about gangsters in Atlantic City during Prohibition.  There's something about that era of history that seems glamorous and delicious, even though the reality of it was violent and dark.  The History Theatre offers a fun and campy look at this era in our very own hometown.  Capital Crimes: The St. Paul Gangster Musical* is a little like Boardwalk Empire the musical, without the heavy drama, and with the Depression-era Midwest as the backdrop instead of AC.  I almost wish they had gone a little bit further into camp; there were some more serious moments that didn't quite fit the tone of the show.  But all-in-all it's a fun show that is sure to make you want to learn more about these criminals and their involvement in Minnesota history.  And it's pretty cool to think that some of these things happened just a few blocks from where you're sitting.  That's what the History Theatre does best - shed light on the complicated and varied history of our beloved state.

The show tells the true story of Barker-Karpis gang, who were bank robbers, murderers, and kidnappers working throughout the Midwest, including Minnesota, where they kidnapped local beer tycoon William Hamm.  This story is told through the eyes of crime reporter Nate Bomberg who acts as narrator (Jake Endres, also playing multiple other roles, much as he did in the last History Theatre show, Coco's Diary).  We see the Barker brothers, their mother, and Alvin Karpis as they plan and commit crimes.  We also see J. Edgar Hoover and the FBI chase them, in particularly Karpis as Enemy Number One.

A few highlights of the show: 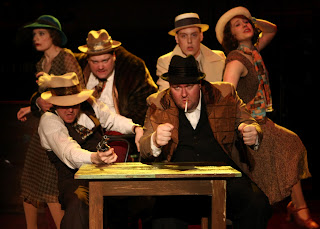