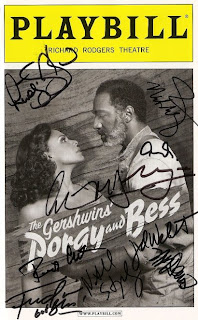 The new production of the Gerswhins' Porgy and Bess is one of those classic epic musical theater experiences, like I haven’t had since seeing South Pacific at Lincoln Center four years ago. The kind of show where from the opening bars of the orchestra to the last curtain call, you know this is something special, this is the real deal. A new and exciting interpretation of a classic piece of music-theater history that is still so resonant it feels fresh and new.

Everything about this production is top-notch – the gorgeous music by George Gershwin, the staging and choreography, the sparse but effective set (with working water pump!), and the cast. Oh the cast! Audra McDonald has long been one of my favorites, mostly because of the Ragtime soundtrack (not to mention her role on the pretty good TV show with the really good cast, Private Practice). She’s a four-time Tony winner, and will no doubt be nominated for her performance as Bess when the nominees are announced on May 1. So raw and real, tough and vulnerable. Not to mention her incredible voice singing these amazing (and difficult) songs. Matching her in excellence is the heretofore unknown to me Norm Lewis as Porgy. His body is painfully contorted, but his voice is easy and beautiful, and his presence strong. Surrounding the two main characters is a strong cast of supporting characters and ensemble. Joshua Henry (a Tony nominee for Scottsboro Boys, which played at the Guthrie before its Broadway run), brings his gorgeous voice and charismatic presence to the role of the doomed Jake. NaTasha Yvette Williams is great as the mother figure Myriah. David Allen Grier (who's more well known for his movie and TV roles, but is also a trained and experienced theater actor) is the comic relief as the smartly dressed drug dealer called Sporting Life, but he also has the musical and dramatic chops needed.


I'm not very familliar with the original opera Porgy and Bess, first produced in 1935, so I can’t talk about how this production reworked and reinterpreted the original. I hear they’ve tried bring more depth to the characters, to change what some saw as a racist portrayal of African American life. But I only know what I saw, which is wonderful. I was so unfamiliar with the story that when the show began with another actress singing the classic song “Summertime,” I thought we were seeing an understudy for Bess. Fortunately I was wrong, and Audra made her entrance a little bit later to my great relief. Bess and her man Crown are in the “bad” crowd of Catfish Row, SC – involved in drugs, violence, gambling. When Crown kills a man, he skips town, and agrees that Bess should find a “temporary” man to live with (I guess a woman living alone is out of the question). Porgy is available and willing, so he takes her in. He's beloved by the community, but they think he can never “keep” a woman because he’s a “cripple”    (his foot is turned completely in at a 90 degree angle and his whole body leans, but don’t worry, Norm told us he works with both a chiropractor and a physical therapist to prevent permanent damage to his body). For some reason Porgy loves Bess completely and unconditionally, and is the only person who can see the good in her. It’s a confidence and stability she’s never known, and it teaches her to begin to believe in herself. Until her past comes back to haunt her, and she falls back into old ways. The town turns on her, but Porgy refuses to give up on his Bess. I was frustrated at the open ending, but as Norm said when we met him after the show, it’s an ending of hope, and I have to believe that these two damaged people find each other again.﻿
﻿﻿﻿﻿﻿﻿﻿﻿﻿
﻿﻿The music is, of course, divine. The score includes several songs familiar to anyone who’s grown up in Western culture – in addition to “Summertime,” there’s “I Got Plenty of Nothin,” and “It Ain’t Necessarily So.” As much as I enjoy seeing a modern band on stage, I geek out over a full and luscious pit orchestra, as this is. The choreography is so evocative of the time and place, not too smooth and polished but organic to the people and the situation, from the carefree picnic scene to the tense fight scenes. The costumes are simple but also help to explain who these people are, with Bess changing from a form fitting red dress to a soft floral dress as she becomes an accepted part of the community.  Diane Paulus seems to have a knack for directing classic pieces of music-theater history and bringing them to modern audiences; she also directed the 2010 revival of HAIR that I loved so much.
﻿ ﻿﻿﻿
﻿It’s a tough year for revival of a musical, with the fabulous production of Stephen Sondheim’s Follies last fall. But there’s something about this piece that’s so all-around satisfying, it’ll be hard to beat.