"A Streetcar Named Desire" at the Broadhurst Theatre on Broadway 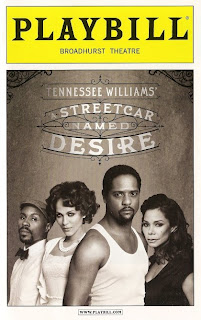 Tennessee Williams’ classic play A Streetcar Named Desire with a non-traditional (i.e., non-white) cast sounds like a great idea. And it is, but unfortunately for the production opening April 22 on Broadway, the execution is a little lacking. I saw the show in previews, so they still have time to make changes. And really the basics are all there – the cast (despite being filled with TV actors) is really quite good, and you can’t ask for much better material than Tennessee Williams. It’s the tone of the piece that’s off. This is a great American tragedy, and the audience was laughing and hooting like it was a romantic comedy. Perhaps part of the problem is that the TV actors draw an unsophisticated audience, but the fact is, if it’s done well, any audience should get it regardless of their background (see: Ten Thousand Things). I think the problem is that they play up the humor (which is supposed to be a dark, ironic humor) so that the audience is fooled into thinking this is a comedy. I heard laughs as Stanley was desperately and infamously calling “Stellaaaaaaa!” This is a moment that should not play for laughs. I even heard a few chuckles as poor Blanche was struggling on the floor as she was being hauled off to the loony bin. Somehow the audience missed the fact that this is a tragic and desperate situation – spousal abuse, rape, mental illness, poverty. I really don’t know how this cannot be apparent in any Tennessee Williams play, but somehow, to this preview audience, it was not. Perhaps in rehearsals the director and cast didn’t realize how this would play to an audience, and now that they’ve heard audiences laughing as the actors pour their hearts out, they’ll make some changes to remedy the situation. Or maybe I just was part of a weird audience that night. I think I would have enjoyed the play a lot more if there were no audience. Every time they laughed it took me right out of that deliciously tortured and poignant world of Tennessee Williams.

Blair Underwood, famous for playing smooth, sophisticated, beautiful characters on TV, is surprisingly good as the rough and violent Stanley, who passionately loves his wife even though he beats and belittles her. But he’s still beautiful, which may be part of the problem; some people may come to the show just to see him, and want him to be the romantic hero, which Stanley most definitely is not. It's not his fault that he can't get away from being Blair Underwood.  Daphne Rubin-Vega (who so wonderfully created the role of Mimi in RENT), is also good as Stella, especially as she grows more desperate in the second act. But this play is really about Blanche, and Nicole Ari Parker (in what appears to her stage debut) does a good job with this tough but fragile Southern woman whose way of life is disappearing as she tries to hold on by her fingernails. (It dawned on me that Blanch is Maggie from Cat on a Hot Tin Roof, if Brick had killed himself.) The last of the four main characters is Mitch, who should be a sad, lonely man who’s willing to settle for Blanche, a damaged woman who doesn’t really love him (at least judging by the excellent Guthrie production a few years ago). Wood Harris is miscast in this role. As much as I love my favorite drug dealer Avon Barksdale from The Wire (OK maybe second favorite, after Stringer Bell), he just doesn’t seem right as the guy who never gets the girl. There’s no way Wood Harris’ Mitch would be an aging, lonely, single man living with his mother.

I truly hope that they’re able to fix the tone of the play before the opening. Because I do love the non-traditional casting, and the good news is that a few minutes into the play you forget that there’s anything different about this Streetcar cast, and the implausibility of an African American family having owned a southern plantation for 100 years in the 1950s. That doesn’t matter anymore once you get into the story. Unfortunately with this production, there are other obstacles that get in the way of this classic.