"1968: The Year that Rocked the World" by the History Theatre at the Minnesota History Center 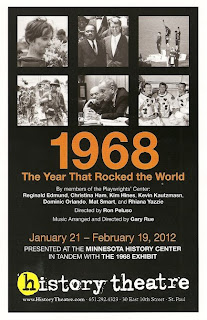 I have to admit, I'm enamored of the late 1960s.  The music, the fashion, Woodstock, HAIR, people standing up for what they believe in.  It all seems so thrilling and, well, cool.  But the late 60s were not all love beads and peace signs.  It was a tumultuous time in our history, particularly 1968, the year that is the focus of an exhibit at the Minnesota History Center and a corresponding play by the History Theatre.  Two of our country's leaders were assassinated, the Vietnam War was at its height with hundreds of people dying every week, protests on our own soil turned deadly, and there was a dramatic and pivotal presidential election.  All of these events and more are covered in the exhibit and the play, and I learned so much more about this era that I find so appealing.

The play is comprised of seven scenes that showcase returning soldiers, the Civil Rights movement in various forms, people's reactions to the assassinations, the election, and Apollo 8.  The scenes are strung together with songs and dialogue as the cast guides us more or less chronologically through the year.  History Theatre's Artistic Director Ron Peluso structured the scenes (written by seven different playwrights) and directed the play.  Standouts in the cast include Lindsay Marcy, who plays three different characters equally well (the new wife of a soldier, a modern-day TV reporter in a clever tie-in with WCCO news, and the New Jersey mother of a future astronaut).  Randy Schmeling (who was in the first production I saw of one of my now favorite musicals, HAIR, at the Pantages in 2004) is a convincing Bobby Kennedy and a charismatic modern day astronaut visiting his family at the time of his birth in 1968, congenially interacting with the audience.  Perhaps the funniest scene (although at times scary funny) is a creative re-imagining of newly elected president Richard Nixon's experiences that year along with his friend and campaign manager John Mitchell.  Paul de Cordova and E.J. Subkoviak have an easy chemistry, and Paul does a great Nixon as well as a pretty good Johnny Carson (not surprising since he so convincingly played three different characters in last year's The Pride).  Last but not least is Karen Weber's (the witch in last year's Into the Woods) moving portrayal of Rosemary Clooney struggling with depression after the death of her friend Bobby Kennedy.

The music is great, although I would have liked more of it.  We only hear snippets of songs between scenes, when I wanted to hear the whole song.  This isn't a musical, it's a play with music.  The band is made up of students from McNally Smith College of Music in St. Paul (which shares a space with the History Theatre's usual location), and they sound pretty groovy.  They start playing 10 or 15 minutes prior to showtime, so get there early if you want to hear some full song selections from this great year of music.  The play itself begins and ends with songs from HAIR, the ground-breaking musical that dealt so well with the issues of its day, which seemed quite perfect to me.

In the last week I've seen two pieces that deal with tumultuous times in American history: the fantastic musical Ragtime at Park Square Theatre, and this play.  I see a lot of similarities between the two.  In 1906 and in 1968 our country was dealing with issues of war, violence, race and gender discrimination and the fight to end it, poor people demanding to be heard.  All of things these things we're still dealing with today.  It's good to look back on our history and remember how far we've come, and how far we have yet to go.  The struggle, the journey, is not yet ended.

If you go, I would recommend getting to the History Center a few hours early to peruse the exhibit (your theater ticket gets you $2 off admission), but check the website for hours to make sure they're open.  The cafe there has good, local food (again, check the website for hours, Tuesdays seem to be a good day to go).  And if you, like me, love the 1960s aesthetic and are tempted to buy everything with a peace sign, stay away from the museum gift shop.  They have some dangerously cute stuff.