"Into the Woods" by Mu Performing Arts at Park Square Theatre 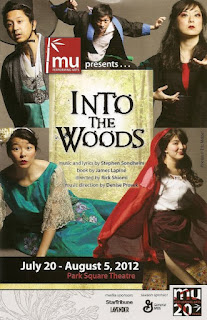 After seeing the Stephen Sondheim musical Into the Woods for the second time (the first being last year's production at BCT), I have an even greater appreciation of the cleverness of the piece. I love how it turns fairy tales on their heads and explores what happens on the other side of the "happily ever after." Does Cinderella get bored living the pampered life in the palace? Can you really get away with killing a giant without repercussions? Things are not always as straight-forward as they seem. In addition to the clever intertwining and re-imagining of fairy tales, the music is of course brilliant. Smart, fast, funny lyrics combined with unexpected and interesting melodies that sometimes don't fall easily on the ear, but that's what makes it so uniquely, brilliantly, Sondheim*. But something unique about Mu Performing Arts' production of Into the Woods is that director (and soon to be retiring Artistic Director) Rick Shiomi has "set the piece in the woods of Asia rather than those of fairy-tale Europe. Several of the classic western tales featured in this musical have equivalent stories in Asian cultures." And the shift works beautifully, shedding a slightly different light on these archetypal stories that are common among many diverse cultures, attempting to make sense of our shared human experience. And it's also a whole lot of fun.

Here are a few highlights in the all-around fantastic production:

The bad news is that the show closes this weekend, so only two performances remain, but it's well worth the effort if you can make it. I've really come to love Mu's slightly non-traditional take on traditional musicals (see also Little Shop of Horrors), which allows me to see them in a whole new light. I'm looking forward to the announcement of next summer's show! (In the meantime, you can catch Mu's awesome taiko drumming ensemble, Mu Daiko, at the Fringe Festival.)


*For more Sondheim, see Theater Latte Da's Company at the Ordway McKnight Theatre and Sunday in the Park with George at Bloomington Civic Theatre, both opening in October.