By: Graber and Napolitano Productions

Summary: Set in 1929 St. Louis, a young writer takes a job with a newspaper to pay the bills, but never forgets about the book that he's written based on stories his beloved grandfather told him as a child. His favorite story is the one about the poet and the prince, and he dreams of the day when he falls in love. So of course, he falls in love with his boss's fiance, a spirited young woman who's not sure she wants to give up her life to move to New York and settle down with the stable, steady man. 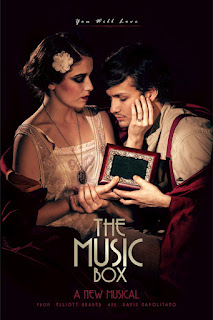 Highlights: I feel like I should have loved this show more than I did. All the pieces are there - beautiful original music in the classic musical theater style, appealing performances by the leads, gorgeous costumes, elaborate sets (for the Fringe), even the clever program made to look like a newspaper from 1929 passed out by boys in period Newsies costumes. This is likely to be the most professional-looking show you'll see at the Fringe (check out the beautiful postcard on the left). But I just didn't connect with it as much as I did some other shows I've seen this week. Perhaps it was a little too cliche, perhaps it was too ambitious (see: frequent set changes that went smoothly but perhaps pushed the running time to the one-hour limit). But if you're a musical theater fan, it's still worth seeing for the gorgeous music and production. Libby Anderson gives a great performance as our heroine Zoey and makes you want things to work out for her. She and Jordon Oxborough (could he be Jared's little brother?) make beautiful music together. This show might work better if it were fleshed out into a full production, giving the characters and relationships more room to grow and develop.