"In the Next Room" at the Jungle Theater 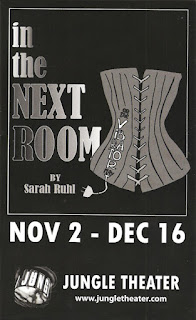 The titular "next room" refers to Dr. Givings' medical office, which, awkwardly, is just off the parlor of his beautiful Victorian home in "a prosperous spa town outside of New York City." Women visit Dr. Givings when they're feeling a little off, and he very calmly and clinically administers the therapy, as their husbands chat with Mrs. Givings or take a brisk walk around the grounds. Catherine is very curious about her husband's practice, despite his attempts to keep her away from it. The ironic thing is that the doctor who is helping many women, strangers, to feel better, is completely oblivious to his own wife's needs. She has recently given birth to a beautiful baby girl but is unable to produce enough milk to feed her, so a wet nurse is hired to feed the baby. This leaves Catherine feeling inadequate as a mother and as a woman, something her husband has little sympathy for. He just pats her on the head and says "there there." Her restlessness and dissatisfaction manifest themselves as falling in love with a male patient (it is rare, but men apparently can also suffer from "hysteria"). Eventually the Givings are able to talk to each other about how they feel and what they want and need, in their own sort of way, and begin the road to healing and connection (without the aid of electricity).

This is a dream cast. The capable John Middleton brings the doctor to life and hints that perhaps there is something behind his cold exterior. As I've said before, there's nothing Christina Baldwin can't do - comedy or drama, musical or straight play, or all of it combined. She's completely delightful as doctor's wife, her bubbly exterior masking the pain underneath (and she even sings a little!). Also great are Emily Gunyou Halaas as the reluctant patient who comes to depend on the therapy, and the always entertaining Bradley Greenwald as her insensitive (to say the least) husband. My new fave Austene Van (I'm super excited about her upcoming role) brings much compassion and humanity to the role of the wet nurse, who has recently lost her own baby and is now giving milk and love to a stranger's baby. Ryan Underbakke is quite charming as the artist suffering from hysteria, and Annie Enneking brings a softness to the outwardly brusque and efficient midwife assisting the doctor.

I feel I must devote an entire paragraph to the sets at the Jungle, and to this set in particular. I've come to believe that the Jungle has the best sets of any theater in town, not because they're the most fancy and elaborate (that would be the Guthrie and whatever touring Broadway production is currently in town), but because they serve the story best, and create the most distinct and specific world in which that story exists, from the sparse and barren world of Waiting for Godot, to the shabby rooming house of The Birthday Party, to the gorgeous home of the Givens juxtaposed with the cold and efficient operating theater "in the next room." Often the director also serves as set designer at the Jungle, giving a cohesive focus to the story and its environment. Although that's not the case here, the result is the same. Sarah Rasmussen beautifully directs this piece, and Bain Boehlke has created a beautiful world in which it comes to life. And the effect at the end, when the Givens go out into their winter garden, is something quite magical. In the Next Room, or the Vibrator Play, really is a beautiful and touching holiday show!

And then there are the costumes, gorgeously designed by Moria Sine Clinton. Not only do they look luscious, but they're also functional, as most characters strip down to their underthings. It's quite fascinating to watch the layers come off and go back on again in a complicated but orderly manner. And yes, the underthings are just as beautiful (and yes, they use the word underthings).

In the Next Room is the final show in The Jungle Theater's 2012 season, which also included the Ivey Award-winning (for lighting) and deliciously thrilling Dial M for Murder, the bizarre Pinter play The Birthday Party, the hilarious and fast moving farce Noises Off, and the delightfully absurd Waiting for Godot. It's truly been a remarkable season. Is it possible the 2013 season could be better? With recent Broadway hit Venus in Fur (starring Anna Sundberg and Peter Christian Hansen), Deathtrap, Urinetown (a musical I love and have been dying to see again), Fool for Love, and Driving Miss Daisy starring the incomparable Wendy Lehr, the answer could be yes. Stay tuned. In the meantime, go see the perfectly delightful In the Next Room, or the Vibrator Play, playing now through December 16.