Fringe Festival: "Those Were the Days: A Tribute to Television Themes" by Blue Umbella Productions at the Minneapolis Theatre Garage 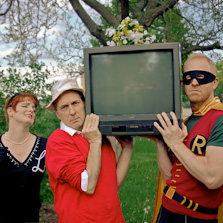 Remember how I said '80s music is not my thing?  That's because I spent the '80s watching TV.  So Those Were the Days: A Tribute to Television Themes is totally my kind of show.  The music is entirely from TV show theme songs, with a few commercial jingles thrown in for good measure.  Being a lifelong TV addict, I knew most of the songs they sang, and even the ones I couldn't quite place, I recognized because they're so much a part of our pop culture history.

The show takes place at a memorial service for the TV theme song, which is long dead.  And it's true, even though I've never really thought about it before: TV shows don't have theme songs anymore.  Back in the days before DVRs or even VCRs, we were forced to watch the credits and commercials, and the theme song was like another character on the show.  But those days are gone.  Don't get me wrong, there are some amazing shows on TV right now.  But no one goes around singing the theme song of Mad Men or Parks and Recreation, which is a little sad. That's why it was so much fun for me to remember all these great shows and their theme songs; it's amazing how the music brings you right back.  And some of them are actually really good song in the hands of musical theater professionals such as these.

The songs are organized by theme - kids ("sunny day, sweeping the clouds away, on my way to where the air is sweet"), teenagers ("you take the good, you take the bad, you take 'em both, and there you have..."), family ("as long as we've got each other"), friends ("thank you for being a friend"), and love songs (including the theme song of my favorite '80s sitcom, "I bet we've been together for a million years, and I bet we'll be together for a million more," although sadly they only do a snippet of the song).  Mostly they just sing a line or two of each song, enough to make me wish they'd do the entire thing.  One song they sing in its entirety is the theme song of Greatest American Hero, "believe it or not I'm walking on air," which was actually a hit song on the pop charts.  And there was a sing-along to perhaps the best TV show theme song of all time: "who can turn the world on with her smile?"  The show ended with Pastor Ben saying that you can still find good music on TV if you just listen, as the cast sang the unofficial theme song of Glee, "Don't Stop Believing."  (And really, if any show should have a theme song, it's Glee!)

I had a blast at this show, remembering some of my favorite TV shows.  Those Were the Days is presented by Blue Umbrella Productions and written by Paul Wittemore and Suzanna Winter, who are also members of the cast.  Along with the other five cast-members, they do a great job of bringing these songs to life.  I'll leave you with this, which still makes me smile every time I hear it.
See all of my Fringe reviews.