Fringe Festival: "Minnesota Middle Finger" by Ben San Del Presents at Theatre in the Round 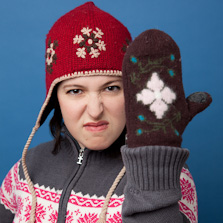 As you can see in the picture to the right, if you flip someone off while wearing mittens, the effect is lost on the recipient.  They just think you're waving and don't recognize the rage behind the gesture.  Such is the premise of Minnesota Middle Finger, in which three virtual strangers are trapped together at the end of the world, which of course in Minnesota takes the form of a 100+ inch snowstorm. Florence and Adam are neighbors who attend a neighborhood party together, mostly because Florence can't think of a good excuse to turn down Adam's proposal.  They wake up the next morning hungover to discover that they're alone in the house with a stranger named Thomas.  The three of them get to know each other quickly whether they want to or not, and must figure out how to survive.  It's a bleak situation, but this play is anything but bleak.  Filled with Minnesota humor, it's sharp and funny and ends with a cliffhanger!

Florence (Leigha Horton) is the good girl who never swears and has her life planned out, but finds something somehow missing.  Adam (Tim Hellendrung) is the nice but slightly nerdy guy (he played trombone in the high school marching band) whom pretty women always overlook.  And Thomas (John Middleton) is argumentative and slightly crazy - he carries a gun around, which fortunately is only a BB gun.  Flo and Adam don't recognize him from the neighborhood, so he eventually admits that he used to live in that house until he fell on hard times, and came to the party with thoughts of hanging himself in the bedroom.  But since the end of the world appears to have arrived, he decides to stick it out.  The three entertain themselves by playing board games, eating pop tarts and pancakes, and arguing with each other.  The truth comes out when the world is ending, and it's not always pretty.  They eventually decide to do something about their situation.  The ceiling is threatening to cave in, so they yell and make noise in attempt to get it to collapse, and then hope to find a pocket of air somewhere on the edges.  That's where the play ends, and we never know if they were successful.

This three-person cast is great, very natural and funny and with great chemistry.  It was also a popular show; it won the encore award, meaning it had the most ticket sales at the venue.  Which I don't disagree with; personally I loved the beautiful opera Twisted Apples, but Minnesota Middle Finger is more accessible and audience-friendly.  A fun exploration of the Minnesota psyche, relationships, and something we Minnesotans are familiar with - being snowed in.

See all of my Fringe reviews.